The Russians Are Here

At the time of the renowned 'Cold War' the Brits could often be heard saying 'The Russians are coming'.  As a youngster, I was given the choice at secondary school, of studying a foreign language from either French, German or Russian. I opted for the latter, but never became that fluent. Maybe today, it would have been more useful, as the Russians have arrived on our high street in the form of new supermarket, Mere. 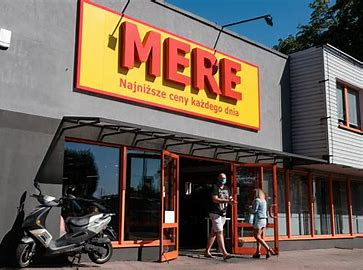 Dubbed the 'Russian Lidl', the new supermarket on the UK high street has appeared in the uninspiring suburbs of Preston in Lancashire. Bargain basement prices are already attracting the cost conscious shopper to this shabby-cheap expanse of retail space. Breeze block walls surround long lines of wooden pallet-lined isles stacked high with a random array of products. It reminded me of a supermarket I visited some years ago in Vanya in Bulgaria - no tomatoes that day but loads of courgettes!

However, Mere might have a drab and minimalist interior, but the prices will send the board members of Aldi and Lidl into hyper-ventilation. Just compare a pack of 24 Luxe loo rolls at £2.70 compared to paying £5.70 at Lidl. Those attracted to the concept of 'how low can you go pricing' will find Pampers nappies at £1.90 for a pack of 22, 400g bags of pasta at 23p and 120 PG Tips teabags for £1.79. With pallets of 800g tins of peeled and chopped tomatoes for 39p, it is clear that the wooden structures will soon be emptied by hungry shoppers. 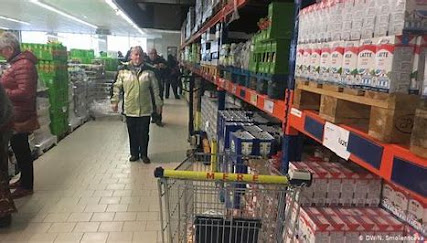 While the prices are tempting, the branding is a different story. You might be happy with 'Tat' tinned tomatoes once you have tasted them, but branding in so cheap a supermarket may turn away some bargain hunters. Admittedly, Mere has moved into the bottom of the shopping market, but its owners are quick to point out that while they are at the bottom for price, this does not mean that their products are tat. They claim to be hard discounters, but if their supplier's products don't sell, then they are told to take them away. Mere's slogan is 'Low Cost Every Day' (not exactly flows off the tongue) and they aim to be 30% cheaper than Aldi and Lidl.

Owned by Valentina Schneider, whose family head up Russia's Sveto supermarket chain, they certainly have an impressive track record - 3,200 stores around the world, mainly in Eastern Europe. Sveto was named as the fastest growing grocery chain in Europe last year. There are big plans for the growth of Mere, with a strategy  to open 300 UK stores in the next 8 years, with three in 2012 - further stores in Mold in Wales and Castleford in West Yorkshire. The first Mere store aims to attract 1.000 customers a day with, on average, every customer half filling their large and only size trolley.

'The Brits Are Coming' say the Russians!