There are a plethora of Food Magazines on the market today but it is a chore to wade through them all on the newsagents shelves, to find one that offers variety, simplicity and quality articles and recipes that cover a multitude of topics surrounding food and drink.

One magazine has stood out  for me over a number of years and never fails to interest and stimulate the amateur foodie. When Olive Magazine drops through the letterbox, everything stops for a good two hours while one scours the pages, from the contents to next months preview. This has just happened, as the November issue of my favourite magazine arrived yesterday and very special it is too - the 10th Birthday issue. Olive began in 2003, and since then has provided thousands of recipes, cooking tips, reviews and features from top chefs and readers. 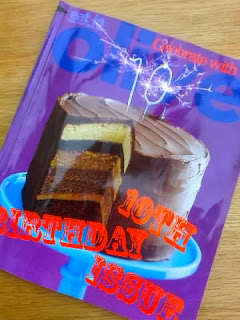 Being a special edition, the November issue devotes a number of pages to the last ten years and how the UK food scene has changed since Olive hit the shelves. Without doubt the food scene has been transformed since 2003. We are told that 55% of Olive readers cook more meals from scratch now than 10 years ago. The decade has seen readers cast aside Delia Smith, whom 29% adored, in favour of Nigel Slater (a surprise to me), but Gordon Ramsey has remained constant, languishing now, as he did then, at the bottom of readers affections (no surprise to me). As for UK eating and drinking  habits - we now eat out more, consume less alcohol per head than in 2003 and vodka is the most popular spirit compared with whisky ten years ago. Interesting pages abound with charts, statistics and comparisons on topics like 'food scares', 'food allergies' and cookery book sales over the past decade.

Despite it 'celebratory' cover, November's Olive, contains many of its regular features - 'eat in', 'eat out' and 'eat away' features include, ten stunning hassle free recipes for entertaining, of which the Meatball melt lasagne looks delicious (below). John Trobe reviews the Rock Lobsta restaurant in the 'eat out' section, while 15 reasons to visit Edinburgh provides a concise food guide to Scotland's stunning capital city. 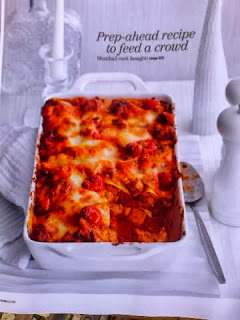 I like the fact that Olive is not crammed with advertising like other food magazines, There are some, but they do not dominate the pages, leaving plenty of space for glorious photographs of mouth watering food that challenge you to 'cook me'.

Olive mixes recipes with restaurant and holiday reviews with packaged food tests and wine tasting and recommendations. There is something for everyone. The 'What's in Season' section provides six new recipes for using Jerusalem artichokes, duck, sea bass and quince and sloes. The duck samosas are on my cooking list! 'Amazing Bakes' features mouth watering desserts with a difference, while '7 Meals for £35' provides impressive support to the cash strapped cook. Book reviews sit alongside ten autumn escapes and a new section entitled 'Lulu's notes' gives Olives' deputy editor space, to focus on noodles, saucepans and smoking fish. 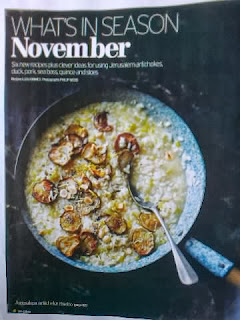 My favourite pages this edition were those celebrating 10 of the best restaurants, particularly as I have had the luxury of eating at Locanda Locatelli, Giorgio Locatelli's  minimalist Milanese fine dining experience in London and it must be in the top 5!

The November edition of Olive, which includes a free 2014 calendar is out now and special subscriptions are available at £12 for 12 issues by quoting OLP113 at buysubscriptions.com/olive 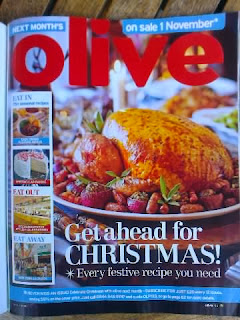