CRICKET TEAS - NOT OUT?

There has always been a strong association between sport and food - tennis and strawberries, football and Bovril, netball with half-time oranges, and cricket and afternoon tea. Well, it seems that for lovers of the sound of 'leather on willow' this could all be about to change. 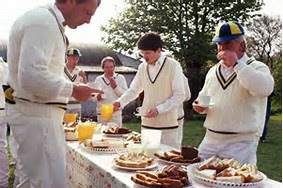 One of the top village cricket teams in England is calling 'over' on teas in the pavilion. Fair Oak Cricket Club in Hampshire, believed to be competing in the world's largest league, is considering scrapping the sandwiches, sponge cakes and sausage rolls between innings to save money and stop players quitting. Top crickets like former England captain, Mike Gatting are 'up-in-arms' and not to signal a 'six'! He and others are defending the traditional cricket tea saying that matches should start earlier to preserve the age old habit.

It seems that at Fair Oaks it takes a lot of time to prepare and eat the food and it should be given the 'out' signal. They say that the cricket tea costs so much money and takes up time that most people just do not have. There are 318 teams in the Hampshire league and representatives at Fair Oaks say that cutting costs will preserve their competition. Gone are the days when the players and their families would prepare the cricket teas themselves, and now people playing just don't have the time to rustle up the food or stay behind after a game to devour those cucumber sandwiches. Other family and social commitments now take priority. With costs of £2000 a season for their teas to be prepared, Fair Oaks may now dump the lot, claiming that not providing tea would save clubs and players money and time. 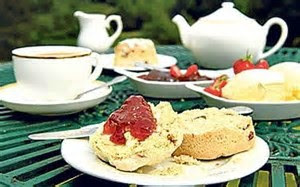 What a sad state of affairs. The social side of any sport is as important as the game itself and for many, including myself, the cricket tea between innings was a time to chew over that maiden-over bowled or that six that hit the vicar's wife! So what is the answer? 79 Tests hero Gatting suggests that starting games earlier could preserve the traditional cricket tea. Meanwhile, ex England batsman, David Lloyd, now a TV and radio cricket commentator says that the tea could definitely be done a bit quicker and he suspects that just one or two people secretly play just for the tea!

A traditional afternoon tea is a quintessential part of English village cricket and good luck to anyone who tries to change it!