Eating On The Go!

I'm due to visit the famous Chelsea Flower Show later this week, though the events at the Manchester Arena last night add a bit of reluctance to a visit to the capital at this time of terrorist's activity. But if I decide to visit the greatest flower show in the world, then it will be a train journey from the second city to London. A day-out such as this, makes me think about my eating arrangements. Do I take a picnic, eat in a South London restaurant, with all the expense that brings, or do I eat on the train? But is the latter an option these days? 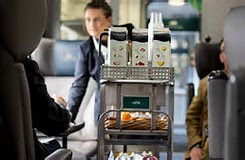 As from last weekend, bacon butties are no longer for sale on trains from Birmingham to London Marylebone - no ploughman's sandwiches, or cheese and onion crisps, neither hot drinks or cold. Chiltern Railways are the latest train operator to abolish onboard catering. Admittedly, nowadays, many rail travelers bring food in little brown bags on to trains from station cafes and takeaways. So has the need for on train catering vanished? 'Yes', according to Chiltern Railways. Will we miss it? I might this week, but for most people, all it meant was a trolley pushed by a reluctant  and hard pressed employee up and down the train's carriages, handing out snacks and pouring hot water on tea bags. 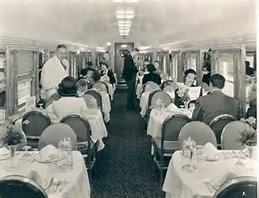 Some other train operators are persisting with the train trolley service, but catering on-the-go is not like it used to be when I was a kid (above). An avid trainspotter, I toured the UK railways trying to spot the Flying Scotsman or the Golden Arrow. In those days, food was prepared on the train and bought on the train. Head waiters patrolled the carriages shouting, 'Lunch is served in the restaurant car!' We are talking about the late 50's, and I can recall eating luxuriously as the scenery sped past the window, whether the glorious Welsh countryside or the urban sprawl. There were restaurant cars on every train, somewhere in the centre of the ten or so carriages being drawn by a whistling smoking steam engine at 70 mph. There was always kippers on the breakfast menu! And who can forget the 'British Rail sandwich'? The 'sarnie' with its curling corners lay in the buffet car's display cabinet like an exhibit from a crime scene. There was frequently a shortage of the ham sandwich and the last one was always the curling relic. All this has gone or is going, so if I'm going to eat on my train journey this week, then I need to seek out my vacuum flask and butter-up some sliced bread! 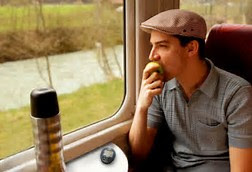