One thing's for certain - policeman look younger than ever! But another certainty you may not realize - shopping trolleys are getting smaller. Gone are the days when we would carry out one weekly 'big shop'. It's now our habit to do a number of smaller visits to our local supermarket, so why would we need a shopping trolley the size of a dog kennel? 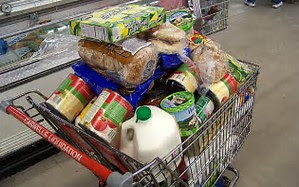 The change in our eating habits means that the large shopping trolley is becoming a thing of the past. People in the UK no longer plan ahead for their meals for the week and instead many visit shops at least once a day. It seems to me, we are in a minority in Europe, as other EU citizens continue to 'stock up' once a week with their food for seven days. I visited the Coop in a large Italian city recently and I struggled to see the shoppers from behind their overladen trolleys of food. Similarly, the Brits increasing keenness to race to the reduced price aisle is not reflected in the rest of Europe. Pursuing bargains no longer carries a stigma among most shoppers in the UK.

Its not just my own observations here and abroad, that have picked up theses changing trends in our shopping habits, the annual Waitrose Food and Drink report highlights them too. Gone are the UK families trekking the supermarket aisles with a long list of weekly shopping wants, pushing a trolley overflowing with tins and cartons. Many parents, working all week, now resent losing a large chunk of their weekend on the chore of shopping for a week's supplies. 'We have seen a seismic shift in food shopping habits' says Waitrose in its report, and as a result they predict that the days of the 'supersize trolley' are numbered! 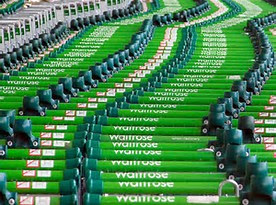 Not surprisingly, a few years ago the average Waitrose store would have around 200 big trolleys and 150 of the shallow 'daily shopper' variety, lined up outside. Now the tables, or should I say the trolleys, have turned with most stores now holding 250 shallow shoppers and just 70 big trolleys. Waitrose have found that two in every three customers visit the store more than once a day, saying that it stops them overbuying. More than 50% of shoppers admit to buying more cut-price products than they did previously - both to save money and to avoid food being wasted. 25% of Waitrose customers said that there is no longer a stigma associated with bargain-hunting.

So it seems that we Brits have become both more flexible food shoppers and more price-savy - not deciding what we're having for dinner until lunchtime! That reminds me..........