Earlier this week my partner and I decided on lunch out and headed for a local country restaurant in Bromsgrove that is situated on the canal side. From its windows you can watch the barges slowly passing by, steered by amateur enthusiasts who fancy a life on the waterways of Britain, if only for a few days. Some boats moor-up and their crew call into the Queen's Head for a pint and maybe a 'two-for-one' pizza, freshly cooked in the open aspect kitchen. 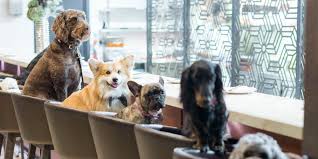 Sadly for me, this eatery welcomes dog lovers into it's dining area and it's not unusual to see panting retrievers and the like supping from a water bowl by the open fire side. I don't object to that - after a long country walk, if it's a pint for the master then the canine friend deserves a drink too. But what really annoys me is when a dog or two join their owners at the table for a taste of their lunch, particularly when they are on an adjacent table to me!

On Monday, we were halfway through a very pleasant lunch at the Queen's Head, when a couple and their little dog arrived for their reserved table next to the crackling log burning fire. The rectangular table was laid for six, Santa hats adorning the place settings and crackers sparkled from the fire's reflection. However, that table was just not close enough to the roaring fire for their dog, whose skinny little body was cold! Without much concern for other clients and a total disregard for the nearby waitress, the couple proceeded to re-lay a smaller round table almost on top of the cracking log burner, moving the festive additions in an instance. Once settled, two further guests arrived and the five of them clustered around the tiny table. Yes, five - the dog took pride of place on his mistresses lap at the table, while the humans perused the menu.

Admittedly, I'm not a dog lover, but a restaurant table is not a place for a dog, or any animal, in my view. Thankfully, by the time the 'five' had ordered their meals it was time for me to leave. There was no way I was going to watch that canine eat his pizza or share his owner's steak tartare. I've seen it all before, the owner feeding their dog from their plate at the table top. It never seeks to amaze me that restaurants allow this kind of unhygienic practice to go on in their establishment. I've no objection to a 'dog friendly' pub, when the dog menu is a bowl of fresh water in the corner of the room, but allowing the dog at the table and serving a plate of food for the beast is just not on! 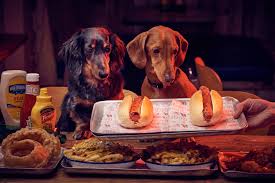 However, the last straw came as I was paying my tab - one of the friendly waitresses proceeded to pick-up the said dog, give it a cuddle and stroke and allow it to lick her hands. I then watched as she returned to the kitchen, failed to wash her hands, pick up someone's starter from the hot plate and wander in to serve it to some naive customer. Relieved it was not me, I left thinking, 'it's a dog's life!'