To Score Or Not To Score

Last week I blogged about my love of sprouts and suggested some of the best ways to cook them for this festive season. However, it's hard for Christmas cooks to change a habit of a lifetime in preparing and cooking the illustrious Brussels. There has long been a debate in our household about the time it takes to carefully score the base of the sprout before cooking. What a chore it is and is it necessary? So many of us do it! It seems that crossing sprouts with a knife dates back to medieval times when the vegetable was thought to contain demons. A Christmas cross was necessary to deter them! 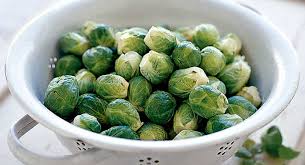 If anyone saw this week's Channel 4 show 'Food Unwrapped Does Christmas' they will have seen the results of recent research on preparing the Brussels. Experts now say that it is a pointless task, as it makes the Brussels soggy. Food texture analyst, Paul Brown, reported for Channel 4 by taking scored and unscored sprouts and boiling them in separate pans for nine minutes, to assess the difference. They were then put into a machine to measure their resistance to pressure. The results showed that it took 3.5kg of force to squash a crossed sprout, but the unscored vegetable withstood almost 5kg. Brown concluded that by scoring, the hot water is getting further into the sprout, making it softer and more squashy. He suggests that we can save some time at Christmas by not scoring the Brussels. But that does depend on how you prefer your sprouts, Mr Brown!

So what's the alternative? Sprouts can be cut in half or just popped into the pan as they are. It should be noted that supermarkets do not sell ready-to-cook sprouts with crosses. However, be careful not to overboil them, whatever is your preference in preparation - crosses or no crosses. Alternatively, read my blog from last week and try roasting or shredding the sprouts instead.