My brother’s daughter, Bjork, is off to Kent University next weekend and like thousands of parents he will proudly be transporting his youngster and all her belongings to her new ‘home’ for the next three years. Hidden amongst the recommended reading, the toaster and the hair dryer, will be a few tins of spaghetti, a jar of jam and a carton of long life milk - a mum’s assurance that their ‘little-one' will have enough to eat during those long nights pawing-over tedious text books. However, mum need not worry, as recent research suggests that university students gain an average of 10lb in their first year. So how do students avoid eating beans on toast every night? 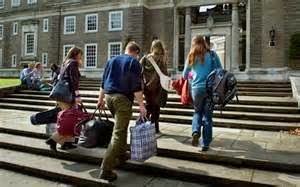 According to new research conducted by dairy drinks company Upbeat, nearly half of students gain weight in their first year, averaging a 10lb increase. This is the bit that the university prospectus omits – it is an inconvenient detail lost. The subject of student diets was raised on the BBC Today programme earlier this year, following another survey, this time conducted by the supermarket chain Sainsbury’s. This showed that more than a third of students cannot boil an egg, and almost half, too, are unable to rustle up a spaghetti bolognese. They might have the academic skills for the best universities in the country, but many have a cooking age of 12, the report says. 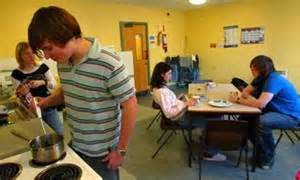 But who is to blame for this? Is it the parents, the children, or the beige food culture that is institutionalized at universities? A number of educationists believe that as a nation we have become too obsessed with doing everything for our children at university, and that part of the further education process should be to learn to be self-sufficient and resilient. Employers have continually criticized graduates for not being “work ready”, claiming that their steadfastness is lacking. But these inadequacies are in a professional capacity – not in the kitchen. It seems to me that we have we bred a generation of spoon-fed, cotton wool-wrapped young people. 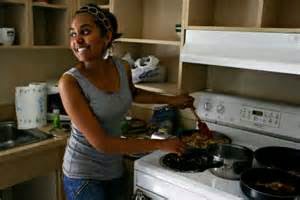 So what do the under-graduates themselves say? Well, according to the research:-
·    “I noticed a change in my weight because I had the freedom to eat whatever I wanted, whenever I wanted”
·        “I ate all the wrong kind of food.”
·        “When I lived at home I’d ate healthily because that’s what my parents cooked me.”
·       ‘’In my first year I’d eat pasties and crisps for lunch, have a fatty dinner – pizza, maybe – and then a takeaway after my night out. The weight simply piled on.” 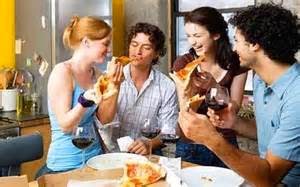 Drinking too can often have an insidious effect too, say researchers and the students themselves seem to agree:-.
·         “You don’t notice the alcohol weight – you blame it on the food.”
·         “You gain calories from the alcohol, of course, but it’s the night-out food that is the shocker. The alcohol enables you; you don’t go out and drink and then not eat – you do both!”
·         “I wasn’t sure about drinking the amount of alcohol that I did over the first two weeks of university.”
·         “I ended up downing tons of alcopop vodka concoctions and eating lots of awful midnight snacks.”
·         “When I’m drunk on a night out, it gets to a point where I’m starving and then I’ll order the biggest meal possible, one I wouldn’t have wanted if I had been sober, or eaten before I went out. I think a lot of it comes from that, and it’s hard to escape it in first year.” 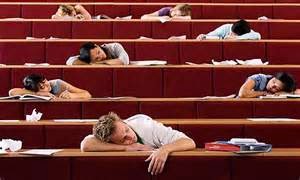 Nevertheless even those non-drinkers admit that they were not adequately prepared for cooking for themselves once they went to university:-
·         I didn’t drink and yet I found myself not quite squeezing into my old school skirt that first Christmas holidays. “I think it was a lack of education,”
·         I was lazy too in my first year. I’d rather cook up a quick bowl of chips, cheese and beans and then head out drinking. I rarely exercised too, which didn’t help.”
·         “I couldn’t cook a thing before I went to university – my mum had to write me a manual, even down to how to switch on an oven. I was shocking!” 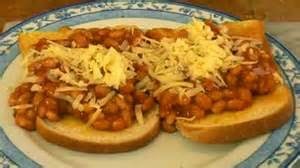 So what can we as parents do if we are worried about our youngster’s eating habits at university? One option is to provide the food for them. I know of a student who received food packages from his parents in the post. His parents would send big bags of pasta and rice, maybe a loaf of bread, tins of tomatoes and pulses, and fresh veg. It was their way of saying ‘this is what you can build a meal with’.

If you ask an expert about what can be done to reduce fresher weight gain without looking like a spoilsport, by giving the Kentucky Fried Chicken a miss, then you won’t be at all surprised by the answer. “The key to success lies in having a balanced diet. Universities can help by offering freshly prepared foods on site, too,” says nutritionist Dr Adam Carey. But it isn’t just good for your body, but your brain too. “Research identifies that individuals who frequently snack on refined carbohydrates like biscuits and crisps have poorer concentration,” Carey suggests. And what about alcohol consumption? Well we all know it’s not healthy, but student’s consumption of alcohol has not really changed since I was at University 40 years ago. 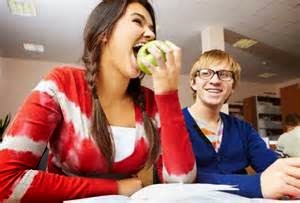 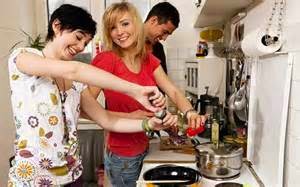 Thanks to the Daily Telegraph.﻿