Afternoon Tea at the Birmingham Hilton 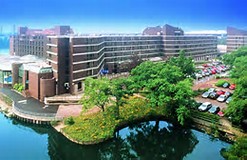 I had a voucher for afternoon tea for two at Birmingham's NEC Hilton Metropole Hotel, bought as a Christmas present by our son. My wife and I were looking forward to a nice afternoon. Sadly the first big discovery was that to park at the Hilton there is a minimum charge of £10! The second disappointment was that the afternoon tea is served in the bar area (below) - no special tables, no white tablecloth, no special treatment - ''just sit anywhere in the bar and a waiter will find you'' I was told. 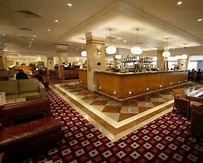 The waiter found us and duly interrogated me as to why I didn't choose 'Groupon' - why would I know this? I was given the voucher and followed the instructions for booking. Next he inquired as to why I had not used the leisure facilities before afternoon tea? Was it any of his business - just serve me the afternoon tea, I thought. My pot of tea and my partner's cup of Costa coffee duly arrived, plus a linen napkin and a knife and fork. The two glasses of complimentary Prosecco followed soon after, along with a wooden rack of six sandwich fingers, two scones and four little cakes (below). My wife finished her cup of coffee quite quickly but there was no refill. That would cost extra said the waiter - £3.25 for a small cup! Another rip off!! Costa coffee is not that good! 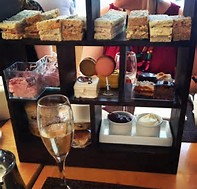 This experience was NOT good value for money, - what with the parking fee, the lack of a special atmosphere, the cost of a second cup of coffee (having to pay for any form of 'top-up' in fact - most other places provide a coffee pot with afternoon tea) and the poor quality of the food - poor choice of sandwiches, brought-in scones and cakes and run-of-the-mill jam. And £25 per head! The only saving grace was the fresh clotted cream.

I would suggest readers avoid afternoon tea here - you get a much better and cheaper experience at Browns in Birmingham's Bull Ring and there isn't a 10% service charge - the final nail in the coffin of the Hilton's afternoon tea.