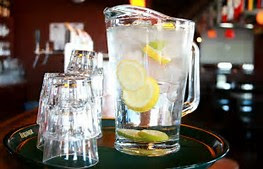 I'm all in favour of trying to reduce the proliferation of plastic bottles going to landfill and the idea of providing water stations where we can re-fill our purchased bottles of water is a great idea. Sadly, I only drink sparkling water, so I will have to continue buying water. My only hope is the introduction of a deposit on plastic bottles, which will help the recycling issue, like the scheme planned for Scotland. So, yes, the Government should  be addressing the issues around our use of plastic bottles, but they are now entering the debate about the provision of tap water in restaurants, claiming a link to the 'bottle debate'. The two are vaguely connected but not the big issue that Ministers are making it out to be.

MPs are accusing restaurants of shaming people who ask for tap water with their meals. I haven't seen that happening anywhere I've been lately! It seems that many people are anxious about asking for tap water for fear that they will be accused by waiters of being 'cheapscapes' - to cheap to pay £2.50 for a bottle of water. Well, they are! Those customers still have to be served with the tap water and it still involves washing their water glasses and the water jug, so why shouldn't they also pay for tap water? Maybe they would't feel quite so anxious if they were paying a nominal amount - say £1 for a jug of tap water. 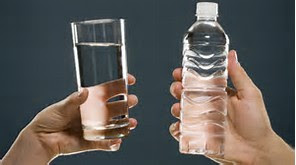 Sadly this will never happen - a condition of a restaurant's licence is that they have to offer water to customers. Years ago, customers were charged for water in pubs, but it's not the case any more. The Licensing Premises Act provides access to tap water, though it seems that in some people's mind an anxiety about asking for it. Admittedly, some eateries provide tap water on the table automatically, (I have to ask for it to be replaced with sparking water!) but if te customer want's water from the tap they should have it maybe they'll think about tipping the waiter for serving it too!