Was it a Gin and Tonic before your Valentine's meal last night or after it? Is a G&T just your tipple on an evening out? If so, then you are contributing to the boom in gin sales that is sweeping the world! 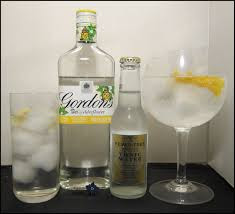 Exports of gin have hit £530 million - the equivalent of 189 million bottles. We Brits now send more of our gin around the world than beef, with our exports up a staggering 12% on 2016 and more than double the amount sold overseas ten years ago. How do I know? The Wine and Spirits Trade Association have just released HM Revenue and Customs figures. Gin's booming popularity around the world has seen sales to the US soar to £184 million, up £12 million on 2016. Within the EU, Spain dominated imports, buying £100 million worth of the spirit - much more than Germany, Italy, France, Greece and Belgium combined.

Meanwhile the growth in craft gin (I notice a new illuminated sign at my local pub last night), have seen British drinkers become more experimental, with small batch gins flavoured with ingredients such as rhubarb, orange peel and cucumber becoming very popular. They helped push up last year's gin sales in the UK to £1.2 billion - the equivalent to more than 47 million bottles.