The time it takes to catch the waiter's eye to ask for the bill, is sometimes as long as it takes to get your starter and if like me, on occasions you decide to split the bill with friends, this can be a pain too. But now all this is about to change with a new 'gizmo' from Barclaycard, that claims to skip these chores. 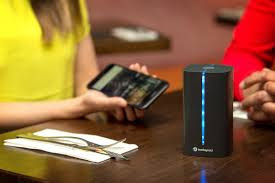 Called 'Dine & Dash', the concept works in a similar way to the pin-less 'tap and pay' idea that we are all getting used to as the new way of paying by card. With 'Dine & Dash', a small black box sits in the middle of the restaurant table and takes care of the entire bill paying process. You might call it a 'totem'. With the special Barclaycard app loaded on your smartphone, you simply tap your handset on the totem when you sit down to eat. Your then order from the waiter after the table device starts flashing blue. Customers can even use the 'Dine & Dash' app to add a tip or split the bill between several cards. And if you think you might hop-off without paying the bill, the tracking totem uses a detection field that can identify when customers have left the restaurant and charges the cost of the meal to their card. Once a bill has been settled the totem flashes green.

Barclays have acknowledged the frustration diners feel when waiting for their bill, reporting that 36% of restaurant customers said waiting for the bill was the worst part of eating out. How long have you waited? A survey shows that on average we wait 19 minutes to pay and get out of the door. So bring it on, I say! This new technology is to be trialed from March 13 at Prezzo restaurants in London.