I've spotted two new vegan cookbooks this weekend on the shelves of my local bookshop. They both seem worthy of a look if you are a cook looking for a vegan book to give you some new inspiration. 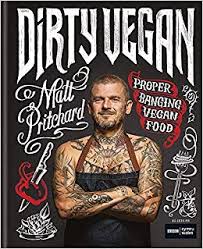 Dirty Vegan by Matt Pritchard (£20 from Mitchell Beazley)
Former Dirty Sanchez stuntman and skateboarder Matt Pritchard adopted a plant based diet and started his own YouTube cooking show to teach people that you can be healthy, fit and strong on  a vegan diet. This glorious book is packed with his uncomplicated, delicious recipes from fried tempeh sambal to creamy mushroom pie and vegan sausage casserole. You must try Matt's Spiced Turkish lentil pizza. He has a new TV programme, 'Dirty Vegan' currently airing on BBC Wales.

Both these books are available at discount prices at Amazon Books, online and in some Waterstone's stores.