No Bums On Seats

According to a recent press report, they cannot put enough bums on seats at O'naturel, the first nudist restaurant in Paris. So much so, that the naked eatery is to close, with the shutters going down on nude fine dining next month, despite rave reviews from diners. 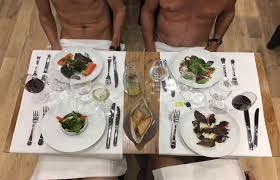 Since it opened 14 months ago, O'naturel, hidden away in a quiet street in the east of the French capital, has attracted customers to take off their clothes to slurp oysters and feast on snails and foie gras. Their three course menu at only 49 euros has been a hit with Parisians willing to carry their cash close to their chest. But owners, Mike and Stephane Saada say that they are having to close on February 16th to avoid financial embarrassment. (They'll first make what they can on Valentine's Day, then!).

O'naturel a reservation-only restaurant, opened in the 12th arrondissement of Paris amid a blaze of publicity in November 2017. It's name is a play on the French term for naked, Clothes must be left in the cloakroom along with mobile phones, to prevent diners from sneaking a photo of other customers. Slippers are provided, although women, who make up 40 per cent of the clientele, may keep their heels on! Unlike staff at London's nude restaurant, The Bunyadi, also now shut, the Saada brothers keep their clothes on to serve customers. 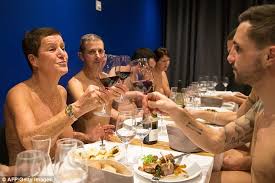 The 42 year old twin owners have acknowledged their regular customers on Facebook this week, thanking everyone for taking part in their adventure and recalling the good moments and the great people.

So if you are curious enough to want to experience a nude diner in Paris, then it's now or never, with just 37 days to go to the big cover-up at O'naturel.