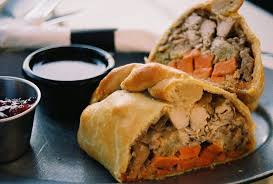 Having shared two new Vegan cook books with readers yesterday it's coincidental that a vegan 'storm' has hit Cornwall this week, with the revelation that true Cornish folk don't take kindly to vegans muscling in on their pasties. Sam Grady has created a 'Cornish vegan pasty' and the locals are so angered that they are demanding she drop the word 'Cornish'.

Baker Sam, claims that her creation rivals the traditional non-vegan pasty for flavour, but according to pasty purists, particularly the Cornish Pasty Association, the official recipe must contain at least 12.5 per cent beef and 25 per cent vegetables, as above. Unfortunately, Mrs Grady's vegan pasty contains potato, onion and swede, but the steak has been replaced with a meat alternative, seltan. 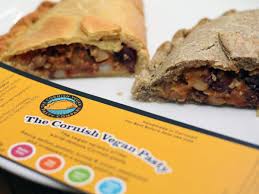 Pasty expert, Marion Symonds, a so-called 'International ambassador of the pasty' at the World Pasty Championship is reported as saying that, while Sam Grady's pasty can be called a vegan pasty, it can't be called a Cornish pasty! Meanwhile, social media has gone crazy with critics claiming, 'They can keep it, its not Cornish', 'Leave our food alone' and 'It's not traditional if there is no bloody steak in it'. One techno Cornishman has tweeted, 'Our forefathers, and mothers are spinning in their graves'. And even the EU, with their last breath of control, has ruled that only a pasty made the traditional way in Cornwall can be a Cornish pasty.

Is it April Fools Day? 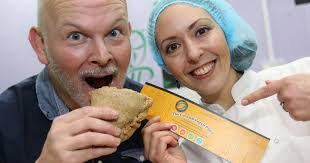 As for Sam Grady, owner of the Cornish Vegan Pasty Company in St Agnes, near Truro, she defends her offering, with the claim that while most pasty producers have upped their game when it comes to vegan offerings, her pasty is the only one rivalling the traditional pasty for flavour.