Lunch Out, At Last, Plus Fabric Napkin 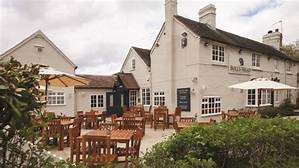 I couldn't resist a second day eating out, when I found a country pub that did not take bookings to their beer garden - operating a 'first come, first serve' policy. How refreshing, compared to many places this week, they offered a varied menu for 'outsiders' or just a pleasant place to sink a pint. I suppose that many country pubs have relied upon their 'regulars' for so long, that they cannot now insist their one man and his dog, whose been frequenting his local for 30 years, get on his computer, which he probably doesn't have, to book a table. Today, it was the elderly flat-capped guy on his ancient Royal Enfield, who purred up, parked up and supped up, before riding off into the April sunshine.

Having settled for a table facing the ancient building, once occupied by the ghost of a lime kiln worker and now a Thwaites owned establishment in the aptly named Lime Kiln Lane, I went for the bar menu and one of the well described sandwiches. The choice was extensive - ploughman's on bloomer, salmon on brown, falafel in wrap, club in toast, cheese on rustic and so on and so on. Once ordered, the service was smart, the waitress smiley and the napkin a 'real' surprise - linen! When have I ever had a linen napkin with a bar meal in a beer garden? In 50 years of eating out in a pub gardens in the UK, I can't recall such luxury. It made me ponder the costs this little country pub would carry, at this time of a pandemic, by laundering every linen napkin, used once. So many breweries, would have opted at this time, for the common paper serviette both for the safety reasons, and costs. I was impressed.

The sandwiches were impressive too, less in presentation, but more in taste - generously filled with a fresh mixed leaf side salad and chunky chips. My Club had plenty of tender chicken, salty bacon and crispy Gem lettuce with large Italian tomatoes. My partner lapped up her prawn and salmon on brown, though she did say it was a little too heavy in marie rose sauce. As for the fabric napkin? It served me well in moping up the tasty mayonnaise that escaped my sandwich and it felt satisfyingly soft to the lips and fingers. A delight! 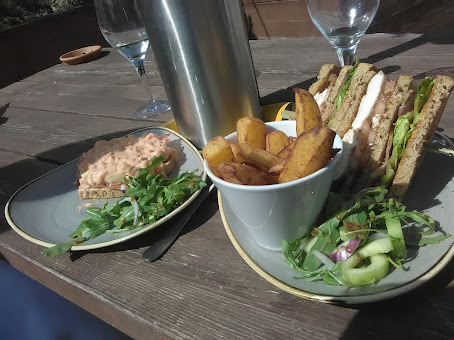 If like me, you haven't had a traditional pub lunch for a year, then seek out a little country pub in the next few days and begin to feel that normality is returning. You may not get a fabric napkin, but you'll feel a welcome in both food and hospitality and just turning up again for that 'usual' pint and a pie will help bring back that forgotten love for the British pub.