According to recent research, wine sales go down when food bills go up. It seems that higher food prices reduce alcohol sales and as such, could help boost our nation's health. 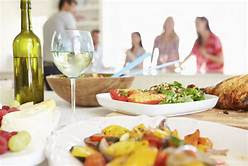 Researchers at Cardiff University have found that the sales of wine, beer and spirits fell when the cost of groceries went up as shoppers were forced to reallocate their budgets. The academic team said that Government ministers should consider their findings when formulating health policy. They suggest that targeted food taxes, rather than across the board tax rises, would be effective. These could be levied on products high in fat, sugar or salt, the scientists explained.

The Cardiff University study, published in the Journal of Public Health, researched half a million people aged 40 to 73 in the UK and identified food and alcohol sales and prices. They found a 1 per cent increase in the cost of alcohol was associated with only a 0.25 per cent reduction in consumption. But after a 1 per cent rise in food prices, there was a 1 per cent fall in alcohol consumption.

Cheers, I'll have a bottle of wine with my Pot Noodle!