Hurray, slaving over a hot stove is a thing of the past! This new kitchen gadget is the gadget of all gadgets to ease the boredom of time consuming stirring of risottos, soups, and stews. No more food stuck in the pan, I'm told. ﻿
The Stirio is an automatic stirrer with enough power to stir a large pot of food for 45 minutes! It can be used to stir anything, including porridge. It operates on a wind up motor and has been created by the Norwegian company Unikia, who have already sold 60.000 world wide, at only  £41.50 plus postage from:  http://unikia.com/

The Stirio has adjustable axle and arms, so it will fit onto a wide variety of pots. It has two stirring speeds, and is easy to clean. You can take it apart; and anything but the motor can be washed in the dishwasher. The Stirio runs on rechargeable batteries, and comes with a handy charging station. Now you can take care of other work in the kitchen, or simply enjoy some time with the family, while the Stirio takes care of your stirring, ensuring that nothing gets burned in your pots ever again 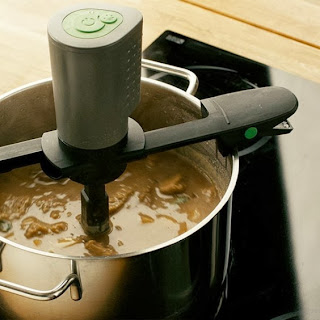 Project manager at Unikia, Jorgen Solstad, is quoted as saying that he wanted to create a true helper in the kitchen, that could stir anything. It needed to be powerful but simple enough that anyone could use it and he assures cooks that nothing will burn ever again. That's good enough for me, I'm ordering one today, ready for preparing those post Christmas left over soups!

Why not put it one on your 'Must Have' Christmas present list.