Subscriptions to food magazines are all well and good, but they all tend to arrive at the same time and so one ends up quickly browsing through all of them rather than giving them the time the cost deserves. BBC Good Food has just arrived and I am still ploughing through Olive magazine. 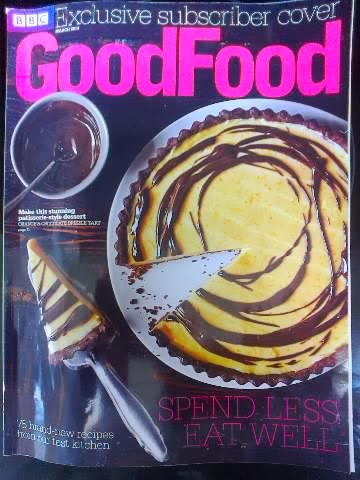 This month, Good Food focuses on Spending Less and Eating Well with 75 new recipes from their test kitchen, ten recipes at a £1 a serving, James's Martin's £5-a-head dinner party and five midweek meals for two at £20. The latter is hardly cheap! Added to this, Ruby Tandoh (below), a runner-up on The Great British Bake Off and the 'cry baby of the competition, explains how she managed to create star bakes in her tiny kitchen on a limited budget. All I can remember about Ruby is her collapsing cakes and her sobs. The article is an interesting read and she does give readers some thrifty tips, but they are tempered when she expects you to have electronic scales, spoon measures and vanilla bean extract - not inexpensive. On the same page, I really liked the feature on '12 ways to cut your food costs' - all twelve were useful, from being a savvy shopper to getting organised in the kitchen. Using your freezer is emphasised, whether it is to freeze milk, cheese or bread and telling readers not to buy bags of salad is an excellent tip - as they deteriorate very quickly and have been in supermarket storage long before purchase. 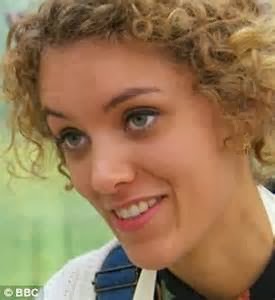 Ideas for Mother's Day gifts for 30 March appear this month, while the 'In Season' feature looks at recipes for bananas with them being mashed, roasted, fried and baked. The Frozen banana yoghurt sounded yummy and the Beef, potato and banana curry with cashew rice looks very tasty (below). Trout and pork dishes follow the 'In Season' theme and two lesser known chefs champion the pressure cooker verses the slow cooker in using up the seasonal ingredients. I am a fan of neither, but if I had to choose then the pressure cooker would win hands-down. 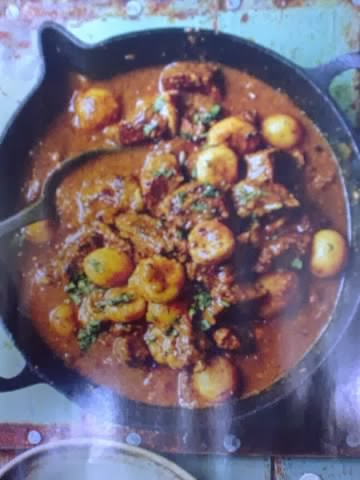 Continuing the Mother's Day theme, Good Food recommends '3 of the best' restaurants to take mum. It is great to see that they are all in the provinces (no London bias) - Talbot Hotel, Malton, The Seagrave Arms, Gloucs and Y Polyn, Nantgaredig, Wales (below). 'Food Lovers Weekend' this month features Bath, a beautiful Georgian city that is always worth a visit, not just to take the waters but there are some fabulous delis and stylish shops. With fewer tourists about, this is a good time to discover Bath. 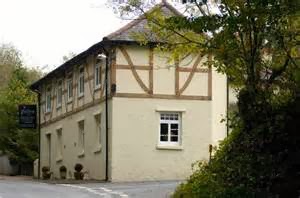 Being a big pasta fan, I found Cassie Best's article and recipes inspirational, with an acknowledgement that the Italians can transform what some people consider a quick midweek supper. Pasta deserves more respect and Cassie's dishes such as Venetian duck ragu, Walnut and red pepper pesto pasta and Baked conchiglioni with sausage, sage and butternut squash (below) made me reach for the pasta shells. I must buy some conchiglioni this week! 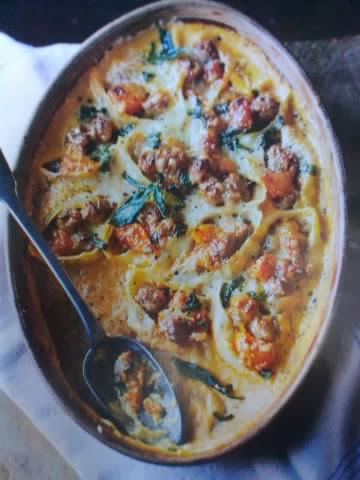 There is plenty in Good Food this month to get your taste buds tingling. Learning to make samosas and being a pasta maker occupy 'Cook School', while 'TV Recipes' feature The Hairy Bikers Asian Adventure and 'MasterChef ', listing two dishes from Larkin and Dale, the 2013 winners. I've met Larkin Cen and he is certainly an enthusiastic young chef. I'll shut-up about Maisie and her teeth, this month, only to say that she makes pancakes with dad, in anticipation of Pancake Day on Shrove Tuesday.