It is pies all the way in the March edition of Olive. There are as many pie and pastry recipes as reviews of London restaurants. My usual moan about the Olive reviewers not leaving London is becoming a bigger rant. As for the 'anywhere but London' feature, Matthew Harris, the chef of Chelsea's Bibendum restaurant, only just about left the capital, venturing to The Ginger Pig in nearby Sussex , the same county as last month, while this month's 'Table-Hopping', highlights four out of four London eateries. That said, linking pies to their pub feature, Olive seems to have realised that the best pubs are outside London. Only seven London public houses get a mention, being overtaken by numerous country hostelries as far a field as Gloucestershire, Suffolk, Yorkshire and Leith. 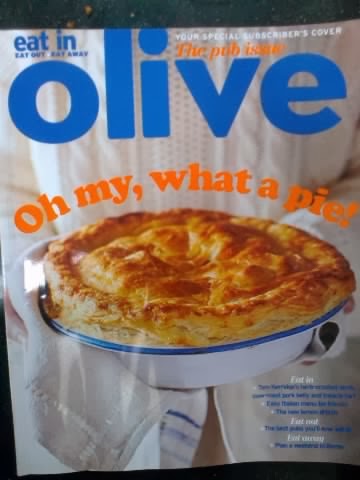 Olive's formula for the ideal boozer focuses on beautiful beer, good snacks, real food, loveable owners and realistic prices. Olive loves to see CAMRA-approved local beers on the pumps, pork pies from award-winning town butchers and regional cheese boards. Don't we all! In contrast, they also tell us what makes them turn and walk straight out - cocktails, bangin' tunes that make you shout, Wi-Fi and throwback food, like prawn cocktail onion rings. Some top chefs and restaurateurs highlight their favourite 'watering holes'. Russell Norman, the new celebrity of TVs 'The Restaurant Man' (below) selects The Red Lion in Stodmarsh, Kent, with one of the attractions being that he can take his dog. I must admit, allowing dogs is a reason for me to turn around and walk straight out. Sadly, most of the chefs in the feature indicate that they think pubs should allow dogs. How very hygienic! 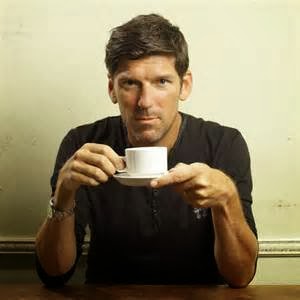 Back to pies, - if you like them, then this month's Olive is just for you. There are steak and ale puds, game pies, shepherd's pies, and you can even nominate your favourite pub pie in an M&S sponsored competition. TV chef Tom Kerridge includes pies in his ideas for Sunday lunch - not my choice for a Sunday meal, although the cover recipe for Chicken, cider and smoky bacon puff pie looks a winner (but not on a Sunday).

Worcester is the 'Bar-hopping' town of the month - not a place that I would select for a vibrant night life, although the Cellar Bar with its cavernous, exposed brick basement bar is cool (especially in the summer), surprisingly charming and a local treasure in Worcester's famous Foregate Street. Among other regular features, 'What's In Season' covers leeks, spinach, salmon, spring onions and goats cheese, with an uninspiring recipe for Spring onion and prawn empanadas (below). 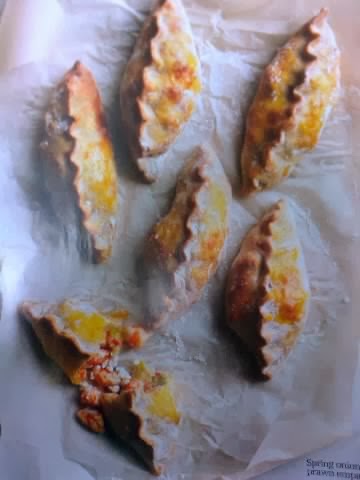 Both the Cook and the Eat 'like a local' covers Vietnamese food and the March 'Weekender' city is Rome (below). I must admit to finding the Italian capital large, sprawling and unfriendly, compared to the more manageable and friendlier cities of Verona, Venice and Florence. 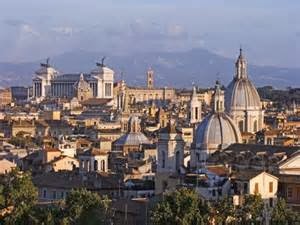 Finally as readers might expect, I found 'lulu's notes' this month on Leftovers, interesting for the lack of reality evident in the article. Using up a fridge full of leftovers is a challenge for anyone, but who in the world, apart from Olive's Lulu, has the following to use up at the same time - feta, spring onions, roasted red pepper, mascarpone, Tabasco chipotle, soured cream. Puy lentils, anchovies and ciabatta mix? If I look in our fridge today, it's squashed tomatoes, one red onion, a few green beans, 2oz stilton, a quarter of a jar of mayo, 3 eggs and half a pepper. It looks like an omelette for lunch then! 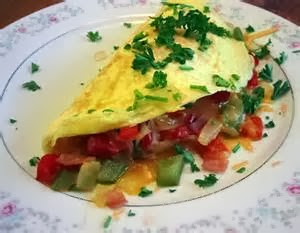