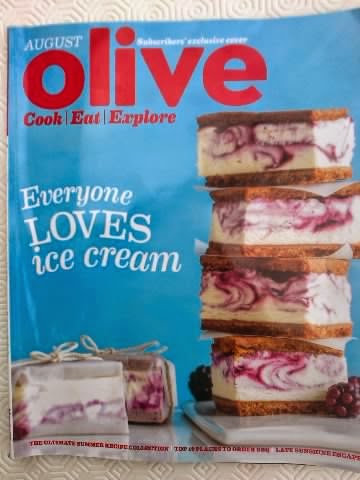 Christine Haynes welcoming editorial raised my spirits when I read it - offering readers an insight into the food scene in Leeds and Food heaven and hell, a celebration of the new pockets of food brilliance throughout Britain. She also prefaces the best places to order BBQ from everywhere between Devon and Aberdeen. Maybe my constant nagging about Olive's persistence that London is the centre for everything foodie in the UK, has finally got through to Ms Haynes.

Sadly, my heart dropped six pages or so on with a page of snippets on chefs and restaurants. Despite being headed up with 'Anywhere but London' and one hundred words on Hampshire's JSW restaurant in Petersfield (below), everything else covering the two pages was about London chefs and London eating houses, whether in Shoredich, N1, Marble Arch, Claridges or Baker Street. Olive's 'People and Places' writers really do need to try harder!. It's not much better over the page, although I suppose their are branches of Harrods and Harvey Nichols outside the capital, from where to get your Whispering Angel rose and your buttermilk salmon et.al. At least 'Bar Hopping' featured the best gin bars as being The Jekyll & Hyde in Brum, The Canary Gin in Bath and Gorilla in Manchester. 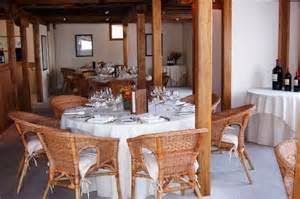 True to her word though, the editor's 'Food Heaven', ventures from The New Soho that is now Covent Garden in London to the No.1 place for Fast Food - Leeds, Britain's Burger Capital - Brighton and Northern Cool - Newcastle. In between, there are highlights such as The Gastronomic Motorway Services on the M5 in Gloucestershire and the UK's Best Food Producers that are resident in Cornwall. So all in all, Olive has tried to venture to food discoveries outside London. As for 'Food Hell', despite three readers naming their home towns of Ipswich, Basildon and Wolverhampton as 'culinary wastelands', it is left to Olive's staff to come up with 'abandoned hope' for London's Docklands, the Lancashire Coast, the Lake District, Leicester City Centre and surprisingly Mayfair and it's £30 spaghetti. There will however be lots of folk disputing these places as centres of bad food taste. My daughter regularly reviews restaurants in Wolverhampton, for the largest regional newspaper's weekend magazine, and she has found some real gems of gastronomic excellence.

All that said, Olive has some inspiring and good looking summer recipes and outdoor dishes, this month. 'In Season' shows some delightful ways to use those summer fruits and berries, while the Little Gem and cheddar cheese tart looks favourite (below). Even 'the cheap-paper pages' provide a summer collection ideal for alfresco dining, such as Greek lamb kebabs with a tasty yoghurt sauce, and the Honeycomb ice cream is one I will definitely be making. (With six egg yolks though, I will have to make meringues with the remaining egg whites!) While mentioning ice cream, the cover recipe of Blackberry ripple ice cram sandwiches, looks as if they could be a hit at party time as they save on bowls and cutlery if eating outdoors. That's a bonus. 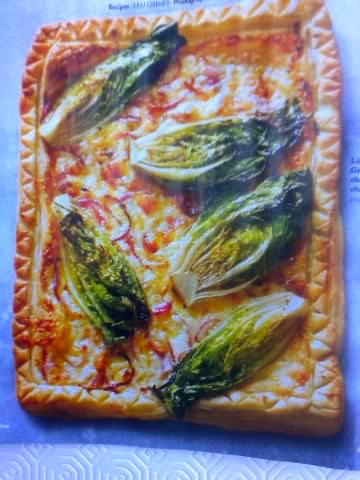 With colourful 'Red alert' pages of dishes using peppers, tomatoes and hot chillies, it is probably appropriate that this month Olive suggests we 'Cook like a local' from The Caribbean. Some readers may venture that far west this summer, but for the rest of us, we have the recipes for roast snapper, baby-back ribs and barbequed chicken with salsa verde. I'm not sure how easy it is to get snapper these days. I must look in Birmingham's fish market on my next visit. In the meantime and continuing the red theme, the step-by-step photos and recipe for Stromboli, really got my taste buds sizzling. Basically, it's a rolled-up pizza, in the same way that a calzone is a folded pizza. In this recipe there are generous additions of salami, basil and pepper, but the rolling of the filled bread dough looks challenging (below). 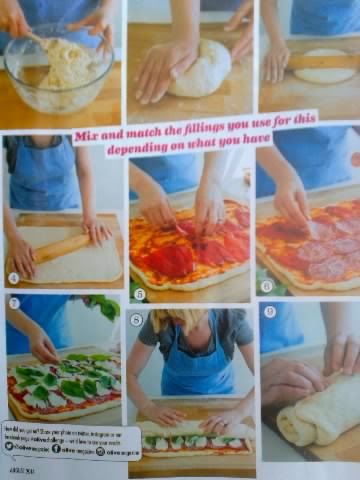 Janine's cheap eats, seem far from 'cheap' this month. I counted a host of quite pricey ingredients such as chorizo for the Feta, chorizo and spring onion quesadillas and raw peeled prawns and tamarind paste in the Tamarind prawn curry. Admittedly, the tuna fish cakes and the Tagliatelle with peas and green pesto looks cheap, with the latter serving two for £2.37. Likewise, the 'Use It Up' page which supposedly gives 12 brilliant ideas for ingredients left over, features some extravagant ingredients that rarely seem to taken up essential space in our fridge or store cupboard. He's a few from the ten, to see if you agree - dried shrimp, lemongrass, crème fraiche, and two sea bass fillets. Yet, no mention of the six egg whites left over from making the ice cream!

Pro versus Punter for August returns to a London restaurant, with the head to head taking place at Claridge's Fera (below) - the place once 'cheffed' by Gordon Ramsey and which Olive describes as 'plush, expensive and elegantly run'. Tom Parker-Bowles, son of Camilla, the Duchess of Cornwall, takes on a doctor from Oxford whose top eating experience was at Heston's Fat Duck in Bray. Unsurprisingly, Parker-Bowles spends £333.56 on his meal for two and Dr Dear a mere £204.19. How the other half live! They score Fera 49 out of 60, which sounds a rip-off to me when paying so much. 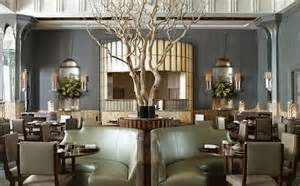 Olive's 'Weekender' page goes this month to one of my favourite cities - Stockholm (below). With our friends, Carina and Ragnar, living in the Swedish capital, we visit regularly and although it is expensive to eat-out there, the food is fresh and tasty and the many open air restaurants and cafes overlooking the busy harbour onto the Archipelago, are just the place to savour all this beautiful city has to offer. Carina cooks regularly for us and my favourites are moose meatballs and reindeer burgers followed by a fresh dill salad and crisp rye bread. An open salmon or herring sandwich for lunch, washed down with a local beer is a delight. I know many of us will have 'tasted' Sweden at Ikea, but the real thing should not be missed! 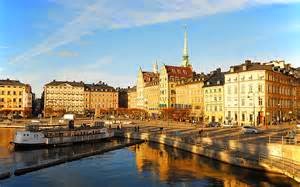 Finally, back to the BBQ Stars, mentioned in the editorial - there is great coverage of some UK wide chefs and restaurants smoking, wood firing and dirty-grilling their meat. Solita in Manchester gets a thumbs up, as does The Pit in Leeds. Camp and Furnace in Liverpool with its chef Anthony Pritchard cooks on coal which enhances the flavour of the burger, while Simon Rogan at The French in Manchester swears by wood for his burgers. It's a great feature and worth this month's subscription.

FOOTNOTE: I tried to get Mussels for the recipe on pages 35/36 in this month's Olive - O dear, Olive, wrong again, mussels are out of season until September. Mussels are only in season in the months with an 'R' in them - September to April, Not now!