I'm confused - on 6th November I reviewed the Christmas edition of Olive magazine and now I've received the December edition which is full of festive recipes and dishes! 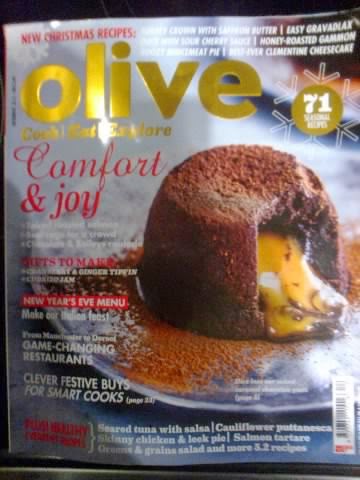 The cover of Olive this month promises 'Comfort and Joy' food, 'New Christmas Recipes' and a 'New Year's Eve Menu' and lots more. The editor challenges our memory to recall and compare our Christmas celebrations today and 10 years ago. She offers us the option of barbequing the turkey, a feature that appeared in the magazine in 2004. But despite this, there are some great dishes to inspire you in this December 2014 edition and some nice Christmas alternatives to the normal roast and the usual trimmings. 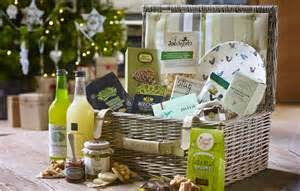 Five Top Christmas Hampers get the once over, with Lakeland's, Rydal hamper getting the number 1 spot at £84,99. It includes a jumble of Great British goodies, like sea salt caramel fudge and Perry Court Farm pear juice (above). The buyers guide to Entertaining selects products from Selfridges such as a nicely packaged chocolate fondue kit and pink pavlova bombes. As for their mini savoury pies - they look too rustic and unappetising. This is unlike most of the food featured on the seven pages devoted to Olive's Christmas Supermarket Awards 2014. The 21 ready-made products are shown-off to their best, with the M&S Hand Decorated Christmas Rose Cake taking pride of place alongside Asda's in-store baked Panettone at only 60p each. M&S also had the best canapés with their American Style Pulled Pork Stacks and the best pie with their Whole Baked Pear, Pork and Stilton Pie - it looks delicious (below). Being a cheese fan, I was interested to see the 'budget' award going to The Cooperative with their Truly Irresistible Cheese Selection at £3 for a 500g pack and that includes an excellent extra-mature gouda. While on the subject of cheese, Olive has some sumptuous recipes entitled '3 ways with cheese', inspired by nationwide chefs. Pear and blue cheese quiche is a favourite in our house and there is a variation tart from the chef at The Tiger Inn in East Sussex.

As expected festive cheer runs throughout the December edition, from wines, cocktails and nibbles to salmon, gammon and brandy snaps. Supermarket wine buyers choose a red and a white wine for £10 or less and a bottle of fizz for under £20. All the supermarkets get a look-in, with expectedly Lidl coming out the cheapest and Majestic the most expensive (hardly a supermarket!). A Petit Chablis at £9 from Sainsbury's caught my eye, as did Morrisons Valpolicella at £7.49. On the food front, the recipe for the Italian-style turkey with saffron butter looks fabulous and the Rich beef ragu with rosemary gremolata dish seems a winner if you are feeding a crowd on Christmas Eve or Boxing Day. Furthermore, if readers want some new ideas for 'sides' then there are three great veg ideas from Donna Hay's book 'The New Classics' - Sweet caramelised baby turnips, Sweet potato, leek and sage gratin and Honey and lemon thyme-roasted carrots. I'll certainly be trying these!

The 'In Season' section has a range of exciting dishes to try, featuring oysters, onions, celeriac, salmon, chestnuts and brussels sprouts. There is a set of stage-by-stage photos on making your own Gravadlax and the Venison steaks with buttered celeriac got my taste buds tingling, while Garam masala roast brussels sprouts will be on our family menu this Christmas - inspiring! However I must also highlight the Onions stuffed with spiced sausage - a treat for all ages (below). 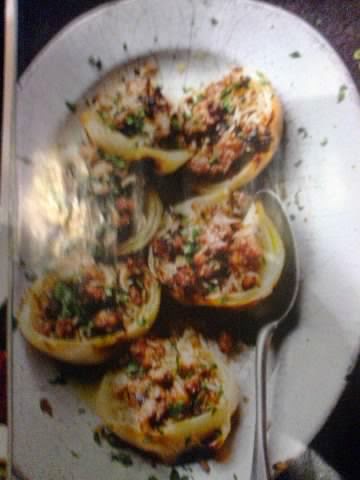 If you fancy an Italian-inspired New Year's Eve menu, then Olive asked Francesco Mazzei and Luca Terraneo from their L'Anima Café to come up with some mouth-watering dishes for readers to try. The menu for 8 has Puglian mixed roast peppers and anchovies, followed by Rabbit stew, then Baked mash with mortadella and cheese with Honey glazed carrots and sultanas and then Cavola nero with pancetta, finishing with Flourless chocolate cake. What a feast!

The Olive staff do not go far out of their office for this month's 'Table Hopping', trying three London eateries that you or I are unlikely to visit. Useful? No! Likewise the 'Bar of 2014' is DandeLyne in Central London. Thankfully, 'Game changers' - a slot on chefs and dishes that have re-booted our eating habits over the last 12 months, highlights 9 out of 17 places that are in the Provinces. House of Tides in Newcastle and Beef & Pudding in Manchester look great (below) among the list. It's pity that none of  Birmingham's four Michelin-star restaurants got a mention. 'Pro v Punter' is back in London at Sea Containers on the South Bank, but it only scored 47 out of 60 with their food getting only 5 from the Pro, Rebecca Seal, presenter of Channel 4;s Sunday Brunch. I'll give Sea Containers a miss then, particularly at £111.94 for two persons! 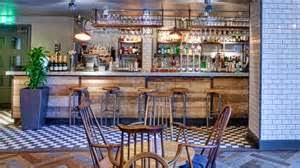 'Bitesize Trips' for December offer readers hotels in Paris, Vienna, Stockholm and Florence as places to take a break. The final two cities I have visited many times and I know some better places to stay than those hotels featured. Shop-around, I suggest! 'Weekender' is in Brussels offering the reader places to find a buzzing food culture and shops to buy great ingredients. If you are looking for a cheap trip abroad, then Olive proposes The Douro on a Shore-string - two pages of suggestions on tasting fine wines, rustic fish stews and salt cod fritters.

Finally, don't miss the 'last bite' on the last page of Olive- a luxurious festive bake of White chocolate roulade with Baileys (below)  - pile on the calories! 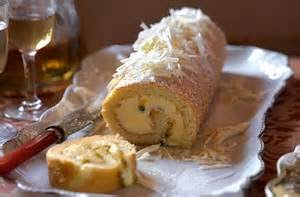