FRIED BREAKFAST IS BACK! 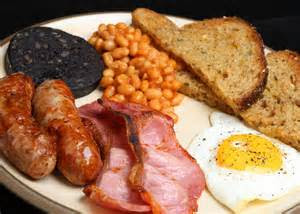 I frequently smell the aroma of fried bacon as it floats over the garden wall from my neighbour's kitchen. Not that I have any desire to heat up the frying pan. I'm a bit more health conscience these days than I was as a student forty years ago, when my staple diet was a bacon and egg sandwich. But not so my neighbour, or millions of other Britons, who are refusing to give up the morning fry-up despite studies linking processed meat such as bacon to cancer.

Bacon has appeared in 87 million more breakfasts over the last year, a 14 per cent increase on the year before according to analysis by the retail industry. At the same time, the sales of fresh sausage were up be 6 per cent. Egg sales are also rising and it's nothing to do with the popularity of The Great British Bake Off!  Even the UK Food Standard's Agency has lifted its warning about the danger of eating eggs with runny yolks, so we are out buying dozens more eggs. Consumption has gone up by 18 per cent over the last two years, despite the warnings about cholesterol and food poisoning bugs like salmonella. 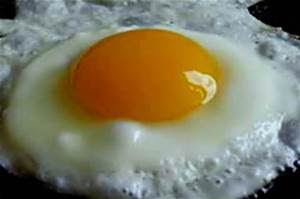 The World Health Organisation has made clear that eating processed red meat raises the risk of cancer, yet us Brits ignore the warning. Eating only 50g of processed meat a day - two rashers of bacon or one small sausage - increases the chance of developing bowel cancer by 18 per cent, putting it in the highest risk ranking along with alcohol, asbestos arsenic and cigarettes. Now I'll stop preaching 'healthy eating' and acknowledge that while we have cut down on bacon and sausage sandwiches and evening meals like sausage and mash, we are refusing to give up our fried bacon breakfast!

Cooked breakfasts are again growing in popularity and so we see key components of the classic fry-up selling well in our supermarkets. It seems the satisfaction British consumers get from bacon, egg and sausage at breakfast appears to be outweighing any health concerns at this meal. Pass the ketchup please!