Having a Roast this Sunday? 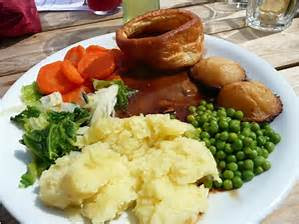 Are you planning a Sunday roast this weekend? If you are, then you are in a minority as the traditional Sunday roast is falling out of favour with families as it is increasingly becoming a midweek treat instead, according to recent research.More than half the roast dinners with all the family sitting around the table are now eaten during the week or on a Saturday. I guess many are eaten at a local pub or a carvery restaurant as some families just can't be bothered to cook!

While the British ate eight million more roast dinners over the past year - an increase of 0.6 per cent to a total of 1.4 billion - Sunday's share slipped below half to 49 per cent. The number of weekday and Saturday roasts rose by 23 million, but those eaten on Sunday fell by 15 million.

It is reported in trade magazines that mini joints and roast-in-a-bag options have helped boost midweek roasts as consumers look for quicker cooking times for traditional dishes.  A mini joint cooks in half an hour to 40 minutes which is perfect as UK consumers increasingly demand a cook and preparation time that fits that timescale.

What are your plans this Sunday? I'm going out for a traditional Sunday roast with my sister's family of eight!