I can't let the Royal Wedding Weekend pass without blogging something about the wedding food - Harry and Meghan's wedding cake to be precise. 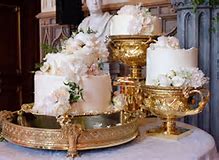 The loving couple went for a lemon and elderflower wedding cake at what was believed to have cost £8 per slice (or $11).  Adorned with 150 fresh flowers, the three part layered creation was rumoured to have cost up to £50,000 to make (that's $67,000). It was covered with Swiss meringue buttercream and the centrepiece was served to 600 guest at the afternoon reception. Italian lemons and elderflower cordial were used in the ingredients. The cake was made by London-based pastry chef Clare Ptak. 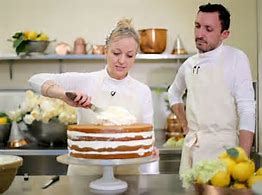 Ms Ptak was assisted by a team of six other bakers, including Violet Bakery head baker Izaak Adams. The cake was made from 200 Amalfi lemons, 10 bottles of Sandringham elderflower cordial, from the Queen's royal estate, 20kg of butter, 20kg of sugar and 500 organic eggs from Suffolk. The inside consisted of layered lemon sponge that had been drizzled with an elderflower syrup and sandwiched using buttercream and lemon curd, while the outside had been decorated using a white buttercream made from elderflower Swiss meringue.

Prince Harry and Meghan had been heavily involved in the culinary process, with the lemon sponge made especially for the couple. “The elderflower is so quintessentially British to me as a Californian,” said Ms Ptak. “It’s a kind of ethereal, floral flavour which I think is very special, especially for a wedding.”

Apparently, there was just a few crumbs left by the end of the Windsor Castle reception in St George's Hall.