Fancy a pasta dish tonight! I do, and there is nothing to beat this tasty penne with lush cheese and sharp peppers. Try it, you won't be disappointed. It's so simple to prepare. If you don't like Brie, then try this with Gorgonzola instead and use parsley instead of dill. If you can afford fresh pasta, then even better. 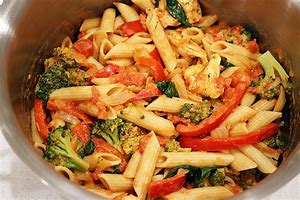