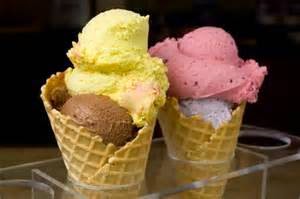 Having spent my summer vacation in the home of the best ice cream in the world – Italy, I was intrigued to read that the UK national press are keen to promote this countries ice cream by naming the best ice cream in Britain. They are telling us where to go for the best ice cream and sorbets, from seaside parlours to London gelato bars. Maybe you have an outstanding ice cream emporium near you. We have Henley Ice Cream close to us in the lovely village of Henley in Arden (below), and on a Saturday and a Sunday there are queues to get at the delicious gelato, with all the outside tables occupied by adults and children licking into their piled-high cornets of hand-made ice cream. 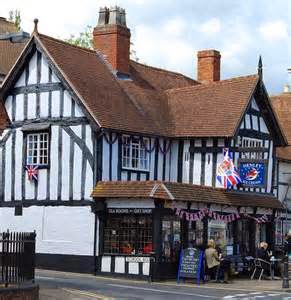 The following are supposed to be the best ice cream providers in Britain. Do you agree?

Minghella’s, Isle of Wight - This family business has been producing ice cream on the Isle of Wight for 60 years, and now manufcatures 200 flavours, including panna cotta with caramel sauce, sweet chunky cherry, and, more esoterically, absinthe sorbet. You can visit the factory, where you might find limited edition and unusual ice creams for sale

Price: 120ml tub is roughly £2-£3 from the factory shop; the ice-cream is also available in cafes around the Isle of Wight
Address: High Street, Wootton, Isle of Wight, PO33 4PL
Roskilly’s, Helston, Cornwall - ice cream is made using Jersey milk from the farm's own 125 cows; even the company's fudge and toffee is made by condensing the milk so that no skimmed powder or cream need be brought it externally. There is an ice cream parlour on the farm that serves sundaes with names such as "Minty Moo" and "Tropical Gala" 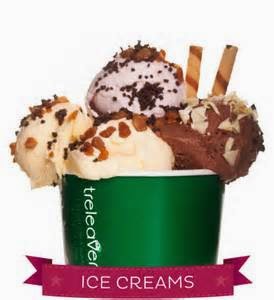 Mr B’s, Cornwall - has retro ice cream vans, uses Italian ingredients and offers hand-made wafers. Its range of flavours is sure to excite even the most adventurous palates, with everything from Jaffa Cake to Turkish Delight and Mint Aero. The "Mario" flavour - complete with figurine of the cartoon character, is made up of two flavours: squishy - tropical vanilla - and squashy - gummy sweet flavour. It's not always available, so best ordered in advance.

Price: £1.70 for one scoop in a cone
Address: Mr B’s Ice Cream, 24 Penpol Terrace, Hayle, Cornwall, TR27 4EQ Otter Valley Dairy, Devon - you’ll need to keep your eyes peeled for Otter Valley Dairy – it’s more of a roadside pit stop than an ice-cream parlour. Tucked into the slope of a lovely Devon valley, four generations of one farming family serve up some of the best ice cream I’ve tried outside Italy. The summerhouse, where you make your purchases, overlooks Otter Valley outside the village of Monkton on the A303. Picnic tables are set out so you can watch the wandering cows that helped contribute to your ample scoop. The flavours are imaginative but luscious – from ginger and butternut squash to sea buckthorn. Weekly specials, sorbets and frozen yogurts are available, too.

Marrocco’s, Hove - this Italian restaurant has been making ice cream since 1969, and the range now comprises of 24 flavours, including yoghurt and blue bubble gum. There is also a range of ice-cream sundaes, including the "Marrocco's Gondola": three scoops of ice-cream, your choice of sauces and dips, and whipped cream. Marrocco's ice cream comes with a so-good-you-may-have-to-queue warning.

Price: £2.50 for one scoop
Address: 8 Kings Esplanade, Hove, East Sussex, BN3 2WS Boho Gelato, Brighton - close to the seafront, has fantastical options ranging from granny’s favourite, Battenburg, to mojito and apple. It also has a strong ethical stance and works with Fareshare, a food waste redistribution charity. Fareshare gives them surplus goods from their warehouse like tea, biscuits, maple syrup and juice, which Boho Gelato then uses in its ice cream. They also use ingredients from local restaurants to create signature flavours.

Price: one scoop £2.40
Address: 6 Pool Valley, Brighton BN1 1NJ Morelli’s, Broadstairs - there are now 10 Morelli's ice-cream parlours in locations around the world from Kuwait to Dallas, but the original can be found in Broadstairs, in Kent. Opened in 1932, this parlour takes customers back to the 20th century, with its soda fountain, juke box, formica tops and pink leatherette booths. Flavours include caramel, wildberry (made using blueberries, blackberries, raspberries, redcurrants, blackcurrants and wild strawberries) and pistachio with nuts from a small village in Sicily. 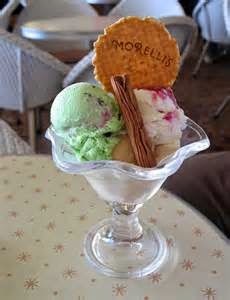 Scoop - with three branches in Covent Garden, Soho and South Kensington, Scoop is making a name for itself as the finest purveyor of Italian gelato in the capital. The shops offer intense flavours, generous portions and keen prices, with friendly staff. Ice-cream flavours include green tea, "Nocciola", with Tonda Gentile hazelnuts from Piedmont, and amaretto, and ice-cream cakes, milkshakes, and waffles are also available.

Price: smallest size tub in Covent Garden £4 (two flavours portion)
Address: three parlours in London: see the website for details
Gelupo - ice cream is mixed gently as it freezes to produce intense flavours and a smooth finish, with the emphasis on fruit and density rather than fat for flavour, meaning that the resulting product is less sinful than other versions. The ice creams and sorbets are produced fresh every day using English and Italian ingredients.
Price: small cup £3
Address: 7 Archer Street, London, W1D 7AU 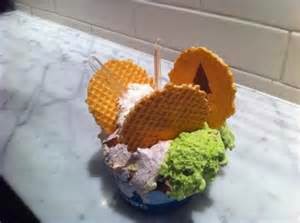 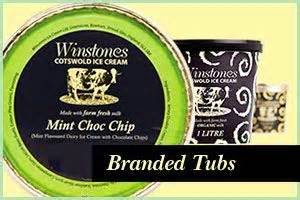 NORTH
Notarianni, Blackpool, Lancashire - this cafe and take-away shop concentrates on producing one flavour - vanilla - really, really well. Fresh whole milk from a local farm is churned and frozen daily, and the resulting product is served in myriad ways: on its own, in traditional sundaes including knickerbocker glories, and in cones including wafers including nougat, oyster delight and chocolate flavoured varieties.
Price: from £1.50 for a cornet
Address: 9/11 Waterloo Road, South Shore, Blackpool, FY4 1AF
Twentymans, Allonby, Cumbria - strawberry, chocolate and vanilla flavours are always available, as is "Thunder and Lightning", a mixture of cinder toffee and chocolate. Daily specials vary but may include Dime Bar or Toffee Crisp
Price: single scoop cone £1.10
Address: West End Stores, Allonby, CA15 6PE
Billy-Bob’s Parlour at the Yorkshire Dales Ice Cream Farm, Yorkshire -  is a family farm-meets-adventure playground that serves Yorkshire’s most spectacular homemade ice cream to waves of devotees. At its heart is Billy-Bob’s Parlour: imagine a Fifties diner transplanted from the American Midwest to The Dales, replete with period signs, music, leather booths and even an aluminium Airstream serving coffees in the corner. Billy-Bob’s is a cathedral to the craft serving everything from cones and coke floats to the best chocolate milkshake you’ll ever taste. As well as the freezers full of standards, a changing list of adventurous flavours always demands a double scoop: liquorice and blackcurrant, Yorkshire rhubarb, bubble gum, ginger crunch. Try them dipped in nuts or over waffles.
Price: ice-cream sundae in the parlour £5.75
Address: Calm Slate Farm, Halton East, Skipton
.
G&T’s Ice Cream Parlour, Yorkshire - the produce at G&T’s Ice Cream Parlour has so many fans, there is even a variety especially for dogs. For something a little stronger there’s a Gin and Tonic sorbet and, in season, Christmas Pudding and Mince Pie flavours. It’s found close to Fountains Abbey and Brimham Rocks and visitors can watch the ice cream being made while they wait. 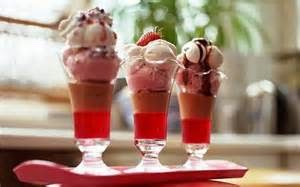 Balderson's Ice Cream Parlour, Yorkshire - one of the highlights in the pretty village of Thornton-le-Dale, close to the North Yorkshire Moors and half an hour from Scarborough on the A170, is Balderson's ice-cream parlour, where flavours include rum and raisin, apple crumble and Turkish delight. Scoops are generous and can be squashed onto a cone or crammed into a cardboard cup.

Nardini’s, Largs - this art deco building was re-opened in 2008 following a multi-million pound restoration, and comprises a cafe, restaurant, and - best of all - an ice cream parlour. The venue sees families, couples and anyone in search of sweet flavours, including Scottish tablet and peach and passionfruit cheesecake. 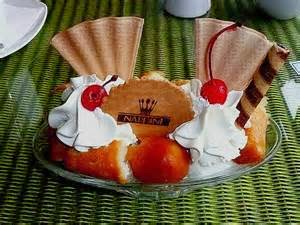 S. Luca of Musselburgh- this family-run business has been producing ice cream since 1908: Mr Luca Scappaticcio and his wife Anastasia arrived from Cassino, in Italy, in the 1800s. There are now two cafes: one in the upmarket Morningside district of Edinburgh, and once in the seaside town of Musselburgh. Flavours include the classsics: strawberry, "vivacious vanilla", and chocolate.

Verdi’s, Mumbles, Wales - sells up to 30 ice cream flavours a day, as well as sundaes including the "Amarena Cherry Gondola" and the "Coffee Nut Sundae", from its sea-front setting in the Victorian fishing village of Mumbles, near Swansea. 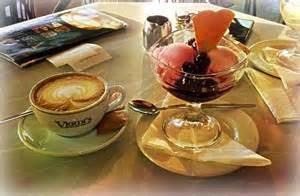 Morelli's Portstewart - on the Promenade at Portstewart, on the Causeway Coast, you’ll find Morelli’s, which, with 99s and knickerbocker glories, has been helping visitors cool off since 1911. Sundaes include the Morelli's Madness, which is a mound of seven scoops of ice cream. 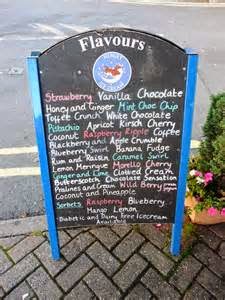 Thanks to the Daily Telegraph for the listings.