You Eat With Your Eyes First

There is a common phrase in our household - 'You eat with you eyes first'. How true that is, and following this maxim, we always try to make every meal we cook look good. Here is last night's simple meat balls and rice supper. I hope you'll agree it looks good enough to eat. And it was! 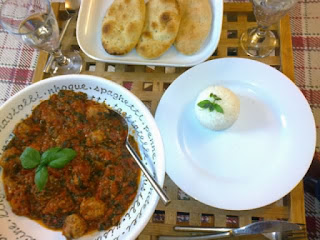 After taking the time to cook a meal, making it look nice as well may seem to much effort. But spending just a few minutes on presentation can push even the simplest meal up the taste scale. Slicing or arranging food carefully, and in our case last night, serving the rice from a mould rather than slopping it on the plate, can persuade diners it is worth paying up to three times as much, according to an Oxford University expert.

Charles Spence, a professor of experimental psychology, said ''Plating up the dish in a slightly more intricate manner can positively affect the taste.'' He asked more than 130 people to taste a salad and a steak and chips presented in three ways. Despite the ingredients being the same, the salad with thinly sliced cucumber was deemed tastiest. Volunteers said they would pay three times as much for it as for one which had simply been dressed and put on the plate. The steak was most appealing when in the centre of the plate, not the edge, and sliced rather than in a large piece. 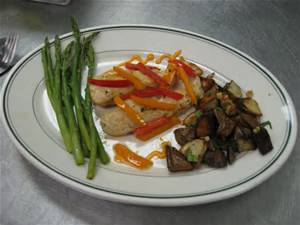 Prof. Spence said the reason is that we may simply think something which looks good also tastes good or apreciate the extra effort taken. Michelin starred chef Kevin Love, owners of Loves Restaurant in Birmingham and the face of Lidl, which commissioned the study, also advised serving odd numbers of items to make dishes more appealing.

It's five carrots and three broccoli florets with tonight's loin of pork then!