Six World War 2 gun towers off the UK's south coast are set to become the world's least likely luxury hotel. Maybe they will be serving 'corned beef hash ' and 'powdered milk' too!

Of all the practicalities involved in transforming 4,500 tons of rusting metal into a £40m leisure complex, at least there's one David Marriot Cooper isn't worried about. ''Money is the easy part,'' says the 72 year-old retired lawyer and would-be alchemist of Operational Redsand. ''I got offered £10 million over lunch by an investor once.''

It's the kind of confidence you want from the man you choose to take on a project of this size. No doubt that's why the trustees of Redsand Forts chose to convert the former anti-aircraft towers, which have rusted in the Thames Estuary since their days as pirate radio stations in the sixties. Their trust seems to to be paying off. In the past three years, Cooper has been busy arranging consent from Crown Estates, finding catamaran and helicopter companies to transport prospective guests and commissioning Aros, a London architecture firm, whose vision shows the forts transformed with helipad, spa and gun-tower penthouse. He predicts the first guests could be staying in 2018. ''Everything really is in place. It is now just about tying down a developer to do the job.'' 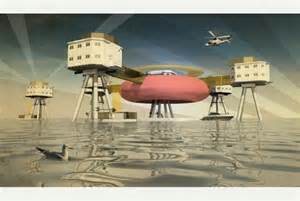 See website for updates, or in the meantime trips to the forts leave Queenborough, Isle of Sheppey, Kent at 10.30am most weekends.