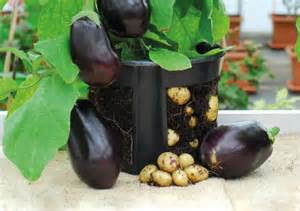 My Thompson & Morgan 2016 catalogue dropped through the letterbox a few days ago, reminding me it's time to order vegetable seeds for the allotment. There is always something quirky to be found among the plants and flowers gracing the pages of this colourful publication. In 2013, the Ipswich-based seed company launched the TomTom - a tomato and potato hybrid (below). This was a plant that let you produce your own chips and tomato ketchup from the same pot. 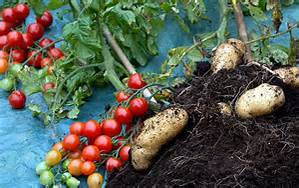 This year's catalogue has a new horticultural hybrid - spuds and aubergines from the same plant. The scientists have come up with the 'Egg and Chips' plant which sprouts aubergines above ground and potatoes below, and before anyone says it, no, this is not an early April Fools joke!

It means that those of us without room for a vegetable plot can produce a bumper crop from just one pot on the patio. Experts have carefully cut and grafted the stem of the aubergine, or egg plant as some call it, to the lower end of a potato plant stem and then left the two to grow naturally. On a good crop, my catalogue promises a batch of succulent purple aubergines and almost five pounds of potatoes. Horticulturists say the hardy potato plant supports the most delicate Mediterranean aubergine far better than its own root system can in British soil. Michael Perry, Thompson & Morgan's product development manager, is reported as saying that even the smallest patio or balcony can accommodate a pot grown 'egg and chips' plant. 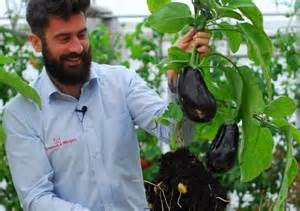 Th plants are sold in 9 inch pots and can be bought via mail order for £14.99 each and will be dispatched from April. (See: www.thompson-morgan.com)