If you saw this week's Channel 4 programme 'Tricks of the Restaurant Trade' then like me you may have been surprised to discover that a meal from Nando's appears more unhealthy than chicken from fast-food takeaways. It found that portions of chicken from Nando's had more calories and sugar than similar meals from KFC. Even though Nando's is more expensive, some of its chicken comes from the same suppliers as its fast-food rivals. In the TV programme, nutritionist Amanda Ursell compared the KFC Toasted Twister wrap with the Nando's chicken wrap and found the KFC wrap had 480 calories and 4.7g of sugar, while Nando's version had 594 calories and more than three times the sugar at 16.2g. Chips from Nando's were more calorific, with one portion containing 546 calories, compared with 310 in KFC's regular fries. And when looking at the wraps and fries together, KFC's version cost £4.59 with a total of 790 calories, and a Nando's meal cost £8.45 and had 1,140 calories. Amanda also noted that chicken burgers from both chains had fewer calories than wraps. What a surprise!

Despite the differences in price, both chains bought chicken from the same place, Moy Park, It is one the UK's biggest suppliers and the Channel 4 programme this week showed a barn containing 25,000 chickens (below). Nando's is reported to have said that all their chicken is British, meets red tractor standards and is grilled and never fried. They did not comment on their prices! 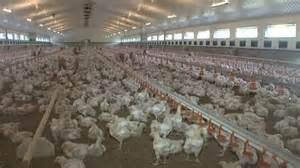 So just be warned if you're a Nando's fan!