If you think that Gordon Ramsey is eccentric, that Jamie Oliver is mad or that Ainsley Harriott is 'off his trolley' then you haven't seen anything yet! If you're talking about eccentricity in the kitchen then you have to look no further than the late great Fanny Cradock - she didn't just colour food, she turned it bright red with flashing lights. So, it is with great excitement all-round that the BBC has announced the return of Fanny to our screens over the Easter period, as the Corporation opens up its archives to revive cookery shows from the 1970's and 80's. 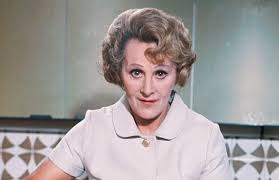 The cookery shows from the past are being brought back to chart the 'evolution of the nation's tastes' in food and show how cookery shows have changed. Alongside her ever-patient husband, Johnnie, viewers will be treated to the first episode that Mrs Cradock filmed in her kitchen. She will be making deep fat-fried cheese and we can witness her breaking two eggs simultaneously, all the while staring at the camera.

Mrs Cradock who died in 1994 at the age of 85, was known for her over-the-top wardrobe and bossy, direct presenting style - something she would not get away with these days. She had a perchant for  cooking with brandy and cream, and a fondness for food colouring - once making green mashed potato and green cheese ice cream. More appealing, was her fondue frites -cheese fondue with chips.  The programmes will run from next Saturday (31 March) on BBC iPlayer and will also include the 1978 Delia Cookery Course, from which the home cook found fame. 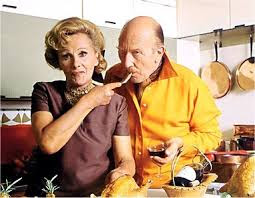 Also among the 50 episodes that will be made available, are the first shows about Indian and Chinese food, presented by Ken Hom and Madhur Jaffrey. Levi Root's Caribbean Food Made Easy, which aired in 2009, will also form part of the revival, as will Lorraine's Fast Fresh and Easy Food.

Don't miss a moment of Fanny though!