The 'bandwagon' to reduce sugar content in everything rolls on, with pressure on food giants from doctors, the Government and Public Health England to cut sugar levels to help combat obesity. But one product that struggles to move forward, is chocolate! Up until now, that is. A chocolate bar which keeps its sweetness but contains 30 per cent less sugar is about to hit the UK high streets. 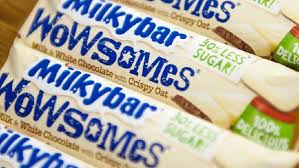 The launch of Milkybar Wowsomes (not a great name), could start a revolution in chocolate manufacture. A technique inspired by candy floss is behind the first chocolate bar in the world to reduce sugar but maintain sweetness. They contain aerated, porous particles which dissolve more quickly on the tongue, giving the same perception of sweetness but with less sugar. Scientists at the Nestle product development centre in York have worked with experts in Switzerland to develop the technique and they believe it could cut sugar content in chocolate bars by up to 40 per cent.

The Wowsomes are also a new version of the Milkybar, which was launched 80 years ago and is popular the world over. They are being sold as small bars of white chocolate or as a combination of milk and white chocolate and they have no artificial sweeteners. You can also buy them in multi-packs and bags. A single 18g bar has 6.9g of sugar and a calorie count of 95 - that is 30 per cent less than for standard chocolate of the same size. For comparison, a standard Milkybar is 40 per cent bigger at 25g but has double the sugar content. Cadbury's 18g Freddo bar has a 10g sugar content with the same 90 calories as the Wowsomes bar. 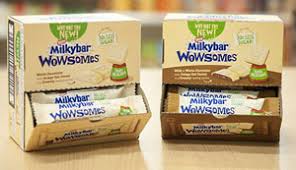 Nestle promise that there are other low-sugar products in the pipeline using the same Wowsomes technique. I can't wait!