I spotted these little fellas in the Waitrose's salad aisle yesterday. What are they? They look like a watermelon but they are the size of a grape. They taste something like a cross between a cucumber and a lime. 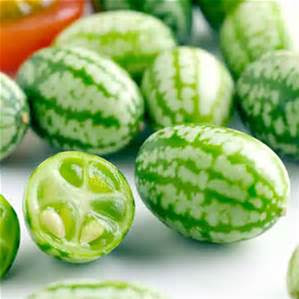 When I finally found a Waitrose sales assistant (there is never one around when you want one and when you don't, three appear from behind the bread counter!), they told me that they are cucamelons. They are not genetically modified laboratory creations, as I suspected, but an import which originated in Mexico thousands of years ago. And now it has reached the UK high street as a grow-your-own plant alongside tomatoes, cucumbers and lettuces. 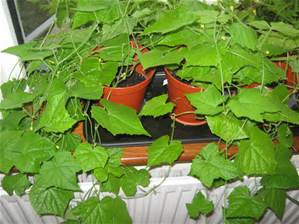 Waitrose is offering pots of the vines that produce the small green fruit as part of a wider collection of plants that can be grown on the windowsill, in a tub or on a vegetable plot. I was told that the cucamelon can be eaten straight off the plant, or tossed with olives, slivers of pepper and a dousing of virgin olive oil for a quick snack with drinks on the patio - or even popped in a martini. The plants cost £4 each or 3 for £10 in a mix and match offer with other grow-your own plants in the Waitrose range. It seems that the John Lewis owned supermarket is cashing-in on customers growing interest in 'easy' gardening and this quirky new fruit is something out of the ordinary. I bought three to try in my vegetable patch, but I won't risk them at the allotment, in case they disappear! 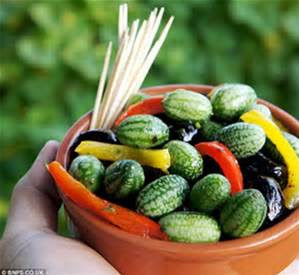 I must find some recipes for using Cucumelons for a later blog.