You heard it here first! On 17th February, I blogged with the name of the new judge who would replace May Berry and join Paul Hollywood in Channel 4's 'The Great British Bake Off. I was right, it's Pru Leith. 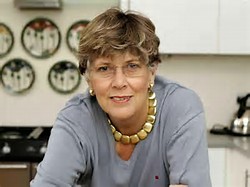 What I did not know at the time. was who would replace BBC presenters Mel Giedroyc and Sue Perkins, who deserted the show once Channel 4 took over the rights. I finished my blog on 17th with, ''If we have the new judge, who will be the new presenters? Let's just watch this space!''

The UK press today, after confirming Pru Leith's appointment to the show also release the names of its new presentation duo. Danish gay comedian, Sandi Toksvig (left) and eccentric performer and glam rock fanatic, Noel Fielding (below) will host the new show, with each of them picking up around £200,000 for the series, far more than their predecessors. Mary Berry, Mel and Sue all quit in protest when the show was sold to Channel 4 TV. However, Sandi and Noel are jut the sort of quirky characters expected from Channel 4, despite today's UK press reporting viewers dismay at the new 'surprising ingredients' to the show. 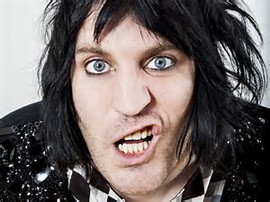 Will the new presenters go the same way as Chris Evans did when he took over as host of Top Gear, or will their wit and charm be a big hit in the baking tent? Let's wait and see when the first series starts in a few weeks time.