Last year, while staying overnight in the Welsh capital, Cardiff, I happened upon one of these British pubs that advertises 'Carvery Dining'. It wasn't that I fancied an 'eat as much as you can' supper, I just wanted an evening meal. 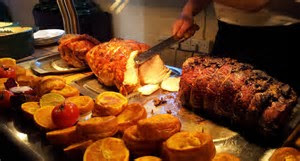 The place was packed at 7.00 pm on a Saturday evening and queues of locals were already standing at the food servery to help themselves to a range of vegetables to accompany their mound of roast turkey, beef or pork, with some opting for a selection of all three meats. What soon became obvious was that much of the vast amount of food piled high on plates, guaranteeing that the diner got their money's worth for their £6.99 meal, was left on the plate at the end of their feast. 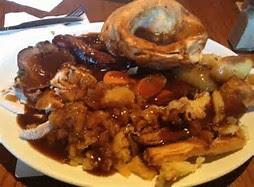 Surely pubs offering a carvery roast should give people smaller plates to help tackle food waste. Officials at the Waste Food Resources Action Programme (WRAP) seem to agree with me. They say that the tactic would help stop people piling plates with food they will not east. It is as if they have to have their money's worth or beyond, whether they can eat it all or not!

The idea of a Sunday roast carvery or hotel breakfast buffet is that they are constantly replenished and people can effectively take as much food as they like. But this tactic is simply fuelling the problem of food ending up in the bin. WRAP's advisers on food and drink have been reported as saying that they have told Members of Parliament on the Common's environmental and food select committee, that there were ways to 'nudge' people to take less. There is evidence that the size of the plate and the size of the cutlery can influence what people take to eat. And, there is a physical limit to how much you can pile on a small plate (although I have seen some small plates dripping with from food mountain!)

If you can replenish your food from the carvery or breakfast buffet at anytime then why take more than you can eat?