Yesterday's newspapers were full of the outrage felt by TV viewers at Mary Berry's recipe for pasta bolognese. I don't know what all the fuss is about? It seems that we Brits have made Spaghetti Bolognese one of our national dishes, whether we eat it in a restaurant or whip up a comforting meal at home, and we like it cooked the 'British way'. 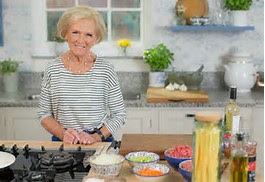 There was public dismay, according to the popular press yesterday, that Mary's version of the Italian ragu used white wine instead of red, included double cream and, heaven forbid, there was no spaghetti in sight. Mary used pappardelle instead (below). So called experts, according to the newspapers were also disgusted at Ms Berry's choice of ingredients and it is reported that some viewers actually switched off their TVs, in anger. I AM pleased that the British population is so knowledgeable about how to prepare pasta bolognese that they are prepared to protest so vehemently, but I doubt it! The so called 'popular British classic' is an abomination of a traditional Italian dish, providing mounds of pasta, in its spaghetti form and a 'tasteless type of fast-cooked' ragu sauce on top. 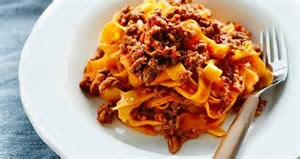 I'm supporting Mary Berry on this one - Italian cookbooks include white wine and cream, but that can also stir controversy even among Italians. Most Italians use a mix of veal and pork rather than beef and some say there should be no tomatoes or herbs. A few cooks, like me, add chicken livers. However, the Italians are adamant that ragu should never be served with spaghetti. Italians insist on tagliatelle. Veteran and renowned Italian chef, Antonio Carluccio, uses veal instead of beef and no tomatoes, but he does include a glass of red wine. As for me, I swear by including 75 ml of white wine, 2 tablespoons of double cream and one tablespoon of tomato puree. Like TV chef, Delia Smith, I include pancetta and freshly grated nutmeg. Here is my wonderful and tasty Meat Sauce recipe for you to try:- 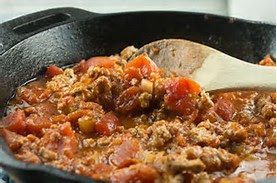 The real secret of a great bolognese sauce, like Mary Berry's recipe, is to let it cook for 2 hours!