I see that Waitrose are reporting a rush to buy cookery ingredients as a result of the success of the BBC2 show, ‘The Great British Bake Off’. More than five million viewers a week are glued to the cookery programme that features collapsing cakes, rude remarks and stressful competition between amateur bakers. 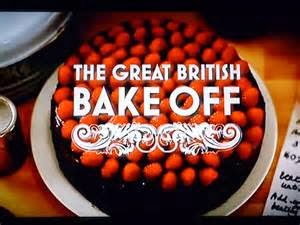 According to Waitrose, the fourth series of the programme is changing British shopping habits, whipping up demand for flour, pastry and castor sugar. The supermarket giant report weekly sales of home baking ingredients are up by 12% in the seven days up to 21 September. That was the week, avid viewers will recall, that presenters Berry and Hollywood required contestants to make biscuit and gingerbread fancies.


As the nights draw in, are you searching out that rolling pin and dusting off those cookie cutters? Do you account for a rise in pastry sales of 24% and sugar of 17%? Have you bought that dried lavender to give a floral bouquet to your tarts?
Nearly seven million ‘would be bakers’ tuned in to last year’s finale of ‘The Great British Bake Off’, hosted by the comedy duo, Perkins and Giedroyc (below), who help to break down contestant’s  stress levels with a spoonful or two of dry humour.  So what makes this unlikely cookery show a major hit amongst UK TV watchers?  According to Paul Hollywood, one of its judges, and renowned as much in the USA as here for his extra marital relationship, it is the old fashioned nature of its subject matter. He say that it is about nostalgia and reminds us of what it was like as kids – our mums baking fairy cakes, apple pies, muffins and custard tarts.  For some of us he may be right - my mum made delicious Victoria sponge cakes every weekend throughout my childhood. 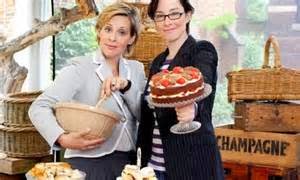 Isn’t the real reason for Bake Off’s success, the novelty value of watching others baking, when so few do it today?  If the old BBC Interlude returned with ‘The Potter’s Wheel’ wouldn’t that have a similar novelty effect?  We love to see these amateur bakers make a right hash of their lemon drizzle cake or struggle to hold up their gingerbread house. We enjoy watching Mary Berry try to be polite about a tasteless apple and cinnamon tart and revel in Paul Hollywood’s blunt assessment of baking quality (below). Some may call this educational, but it‘s much more about pure entertainment. 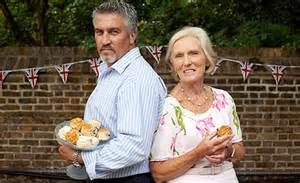 The ‘Bake Off’ effect  simply reflects previous TV related bursts of shopping activity after celebrity chefs such as Jamie Oliver, Nigella Lawson, and Delia Smith recommended individual ingredients or utensils.  I’m pleased Waitrose are reporting increased demand for cooking ingredients, but sadly I don’t see it at Sainsbury’s, Tesco or Asda.  I still get a funny look from fellow customers when I load the conveyor belt with self-raising flour, baking powder, cupcake cases and icing sugar. What are they for, I can hear shoppers say.   But baking is approachable – if you can follow a simple recipe, it will work. The problem is, few recipes are simple!

And Finally, this week's home-made deep filled apple pie, and an apple and cinnamon cake, both using our own apples (below).
I just can't wait to taste the cake! 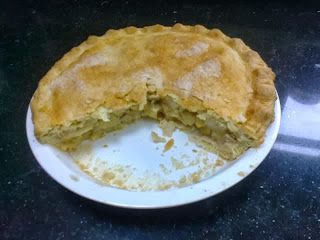 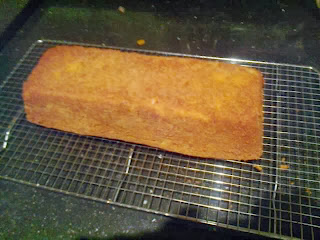 'The Great British Bake Off' is heading to Germany. Called 'Das Große Backen', it's now one of 13 countries to have bought the rights to the series.
﻿