More and more magazine publishers are now issuing their publications sealed in plastic bags, such that there is no chance of flicking through the pages in order to decide if you want to purchase that month's edition. I can understand that increasing numbers of people now stand around in retailers reading magazines, rather than purchase them and publishers want to reduce this practice. But, what it means is that buyers can only peer through the plastic seal and then just take a risk that they'll find articles that will appeal to them.

The November issue of the BBC's Good Food magazine has precious little feature information on it's cover to give any clues to its content. In large print I saw, 'Relaxed autumn cooking' and in small print a list of ''Easy homemade pies * Bonfire Night party food * Boost your immunity: new healthy suppers''. Not at all attractive, but I took a risk and purchased a copy. 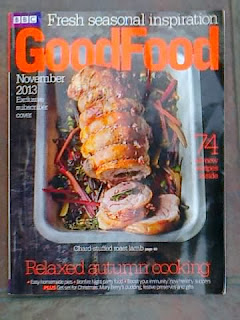 Thankfully, there is plenty more for the keen 'foodie' to get there tongue around, teeth into or taste buds tingling. The edition is divided into an attractive range of topic areas, including 'Cook school', 'Weekend' and 'Healthy', plus an 'Every month' section that appears to be a potpourri of cookery tips. However delving deeper into Good Food it is clear that it is very much a 'food recipe magazine', with 74 recipes in the November edition, all of which they term 'brand-new'. But looking more closely, many of these are basic recipes, such as Shepherd's Pie, which I blogged a simpler recipe on Thursday! Others have a slight twist on a basic dish, like Crab Lasagne.

An article that caught my attention though, focused on fruit and veg. and meat and game at their best in November, but I found it confusing that a feature later in the magazine was providing recipes that included chard, which is now out of season! That aside, the pages devoted to a Bonfire Feast were entertaining and the associated recipe was a hearty wholesome Sausage Stew with cobbler topping - mouth watering! (below) 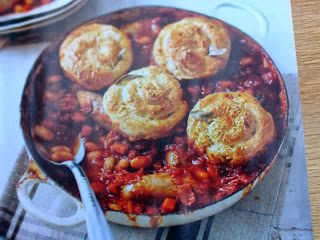 Chef James Martin seems to have been brought out of the food cupboard over the last few months with a new TV show flying over the UK, with 'Saturday Kitchen' and appearances on chat shows. So, he also reappears in the Good Food magazine this month with a  feature on Friday night suppers. I've never found him a particularly exciting or innovative chef, despite his pleasant disposition, but his recipes for Thai chicken and cashew stir-fry and for smoked salmon and crème fraiche tart look inspiring. Sadly, there is nothing new in his steak with peppercorn sauce dish! 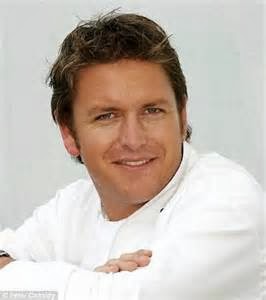 Persian food specialist, Sabrina Ghayour has a nice article on 'Persian food for friends' with a lavish menu of dishes to serve six. The Shirazi salad of chopped cucumber, tomato and pomegranate, which can be prepared in 10 minutes, looks a refreshing starter to any meal. Her carrot cake dessert has an unusual addition of pistachio and coconut. While on the subject of baking, Paul Hollywood offers his egg custards as a challenge for any would-be TV 'Bake Off' contender, but what a mess they look in the photo, in a rusty muffin tray. Not a good advert for hygienic catering Paul - 3 out of 10!  *

Finally, as you would expect from a BBC publication, the issue promotes the forthcoming Good Food Shows at London Olympia (15-17 Nov) and Birmingham NEC (27 Nov-1 Dec), with a brief summary of some of the artisan food producers exhibiting. 'Well Seasoned' - an ethical company specialising in seasonal pesto looks interesting. Their mission is put a British twist on the basic Italian recipe.

The word 'basic', sums up the Good Food magazine. If you are a less than confident cook and need lots of basic recipes, then this is the magazine for you. If you are more inventive and want a challenge in the kitchen, then there are other better publications or cook books of recipes to inspire you. 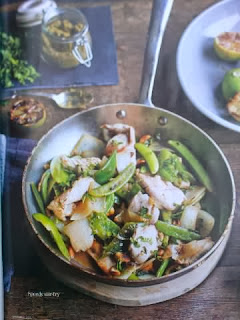 BBC Food Magazine is £3.80 per copy. Subscription deals are available.

* 'The Great British Bake Off' is heading to Germany. Called 'Das Große Backen', it's now one of 13 countries to have bought the rights to the series.