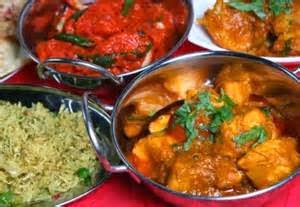 National Curry Week was started in 1998 to promote the cuisine and to raise funds for charities concentrating on hunger, malnourishment and poverty. During the week, curry lovers can get out and visit their local curry houses, some of which will be staging special events and fun challenges. Special Events this week can be found at:


I must admit that the thought of a vindaloo makes me want to grab the nearest jug of water but for me nothing beats a chicken tikka masala with naan bread, pilau rice and potato aloo. With so many different varieties of curry, you could use National Curry Week as an opportunity to explore a new curry recipe every day of the week! There are many people ignorant or afraid of curry, even in Britain. Perhaps it would help those, and visitors from abroad who have often grown to adulthood without exposure to Indian cuisine, if I provide a brief guide to the different heats, flavours and ingredients of the commonest curry types. I know what I'm about to say is incomplete and quite possibly wrong in places - please add comments to the blog so that we can extend it. 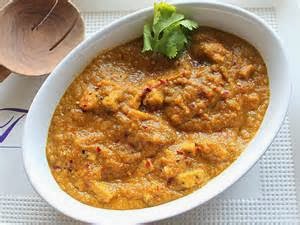 The first thing to say about curry is it doesn't have to be hot. Many of the most delightful curries are the least spicy, and there is often more "heat" in Chinese cooking, or even European dishes such as pepper steak or a goulash. The list below is ordered roughly from the mildest to the strongest, but if you're one of those people who are terrified at the very thought of a curry because you think it is going to be so spicy it is going to burn your mouth - well, most restaurants are very open to providing advice on the best dish to suit your individual tastes. So, if you view curries with a little bit of trepidation, remember you are sure to find something on the menu to your liking, though another useful tip is that you can ask for a strength you're happy with. Most Indian restaurants will try to oblige. Dishes can be made with chicken, lamb, beef, fish and vegetables.

The second thing is that the term "Indian" is used very loosely - many of these restaurants are actually run by restaurateurs technically from Pakistan, Bangladesh, or even Sri Lanka. The food heritage is shared across the sub-continent, and most restaurants serve dishes from right across the region (Kashmir, Madras, etc.). The normal rule is that food from nearer the equator is hotter - watch out in a Sri Lankan restaurant, it can blow your socks off!

The final thing to note is, Indian food doesn't have to have a sloppy sauce - those that do are classic "curries", those that don't are usually "tandoori" food - baked in a traditional clay oven, or tandoori. 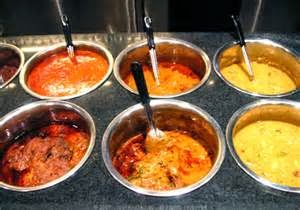 Mild Curries
Korma - The classic "beginner's" curry, with almonds. Can be over-sweet or bland to the more experienced palate, but often a lovely dish.


Tikka Masala - The meat (usually chicken) is cooked in a mild, buttery sauce. A safe dish.


Kashmir or Malaya - The nearest thing to ‘home made’ curries with lashings of raisins, pineapples, banana or lychees making it sweet and sometimes rather sickly. Rather like a warmed-up "coronation chicken".

Pasanda - The King of the mild curries, a royal dish with a creamy sauce containing almonds and coconut. Often also contains wine (white with chicken, red with lamb). Highly recommended.

Medium Curries
Dopiaza - The name literally means "double onion" - there should be plenty cooked in the sauce, and plenty of raw onion sprinkled on top. Not recommended if you have romantic intentions.

Bhuna - Similar to a Rogan Josh but with a thicker, drier sauce.

Balti - In this dish the ingredients are cut into large chunks and the sauce is thicker than a standard curry, because it is served not with rice but with a Naan bread which doubles as the tool for eating it. Originally introduced as a "premium" dish (presumably because it is served in a cast-iron pot) and consequently overpriced.

Karahi - The precursor to the Balti in terms of being served in a sizzling, red-hot dish, it is usually more expensive than a standard curry without tasting discernibly nicer.

Saag - Like a standard curry but with spinach.
Murgh Massala - This is a "special" and sometimes has to be ordered in advance. Unusually, it combines the two main meat types; it consists of large pieces of chicken in a sauce made with minced lamb. The only dish which can retain its dignity whilst containing raisins.
Biryani - A dry dish of rice cooked up with curry powder and some meat. Can be very fragrant and delightful - or can be made from leftovers. 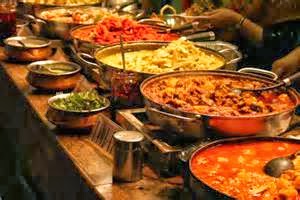 Hot Curries
Jalfrezi - Cooked with a large quantity of peppers, this dish is one of the most visually appealing, and the taste can be anything from a lively medium to a challenging heat, depending on the amount of green chilli used.


Dhansak - This dish is actually of Persian origin, and contains lentils. If you can stand the methane-loaded after-effects it can be one of the tastiest dishes.


Ceylon - This dish is hot and sour, although it contains coconut, which should make it sweeter and cooler. Never quite as exciting as it sounds.


Madras - This one should be hot but flavoursome - not just a basic curry loaded up with chilli powder. It is unusual because it actually contains the leaves of the curry plant whose name has been purloined for the entire genre.


Very Hot Curries
Vindaloo - Must contain potatoes ("aloo") to be genuine. Often blisteringly hot, the potatoes help to take some of the edge off. Build up to it slowly, but the taste can bring a reward worth a little suffering.


Phal - Don't order this dish unless you are a rugby player and have tarnished your macho image and you now wish to be rehabilitated. You will sweat profusely, it will hurt, and you won't enjoy it. 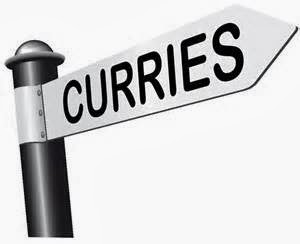 As for the regular curry lovers among you, as it’s National Curry Week, why not try a new curry dish?  Stop sticking to the same old curry; try something completely new or try a little twist on the old favourites.  And don't forget the accompaniments; naan bread, chutney, poppadums, rice and a Cobra beer, of course!