THE HARVARD HOUSE, STRATFORD UPON AVON 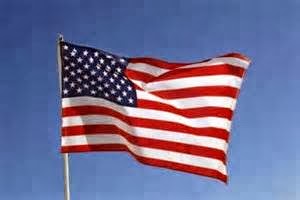 A sunny October afternoon in the birthplace of William Shakespeare is always a very pleasant experience. There were still plenty of tourists around but the restaurants and pubs on Sheep Street were not as busy as at the height of the summer. An open air market in the Henley Street opposite The Bard’s house, attracted many visitors but the riverside areas were relatively quiet for us to wander and watch the rowing boats paddle along the Avon in front of the newly restored Royal Shakespeare Theatre.

Entering High Street, I was amazed by the excessively large flag of the United States of America, apparently flying over a little pub, The Garrick Inn. I had not seen such a large ‘Old Glory’ since my visit to Washington DC some years ago. Added to this, hosts of American visitors had cameras pointed on the historic building before them. 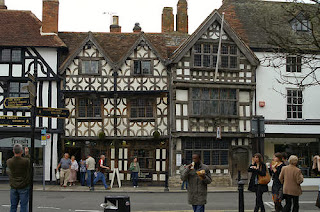 The Garrick Inn, the double gabled building with curving timbers, in the photo above, is in a building that dates from 1595 and has been an Inn since the early 1700s. It's possible there was a pub on this site as early as the 14th century. The Garrick Inn was named for Shakespearean actor David Garrick after he organized the Shakespeare Jubilee in 1760. Until recently, its other major distinction was that this was the only non-smoking pub in Stratford-upon-Avon. So why were the stars and stripes flying over a little16th Century Inn, advertising good ale and freshly cooked fare, with a welcome from owners Lynn and John?

It took me a few moments to realise that the centre of interest for all those American guests was the taller building, with the straight timbers, tucked in beside the lavishly carved Garrick Inn. It was the home of Katherine Rogers, mother of John Harvard, the founder of Harvard University. One of the most ornate homes in Stratford, Harvard House is a fine example of an Elizabethan town house. Rebuilt in 1596, it was purchased by a Chicago millionaire, Edward Morris, in 1909, who presented it as a gift to the famous American university. Today, following a restoration, it has reopened as a Museum of British Pewter owned by the Shakespeare Birthplace Trust. The museum’s display traces the use of pewter from the Roman era until modern times, but more importantly, it is a focus for our friends visiting from across the pond, who can revel in their American connection to historic Stratford and afterwards pop into the Garrick Inn for a pint of old ale and fish and chips.

Steve from Seattle said of the Garrick following a visit this month -  'We ordered the fish and chips as well as the lamb shank. Both were excellent. The service was good and prompt. The cost was very reasonable. I highly recommend this place to my friends'


Anne visiting last month from North Carolina went to the Garrick Inn - 'My husband and I enjoyed our dinner here. The interior is authentic, old, rustic and charming. The food was good and portions ample. The seats are rather tight but it adds to the charm. The restaurant is divided into several smaller rooms which added to the ambiance. The waiters were busy running non-stop. Service was a little slow but we were in no hurry.  Total bill for 2 people for dinner and 2 drinks and 2 desserts was $48' 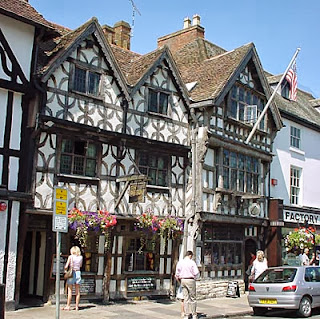 ****
For those of you looking for an overnight stay in Stratford - Puma Hotels are offering rooms at the historic 4 Star Billesley Manor Hotel (below) at £139 per night for a double room, including a three course meal in the hotel’s double AA Rosette-winning restaurant with a bottle of wine and breakfast in the morning. The listed building has an array of stunning and unique features within the walls of the 16th Century Elizabethan Manor House, including the library used by William Shakespeare. Contact: Billesley Manor Hotel on 0800 808 9596. 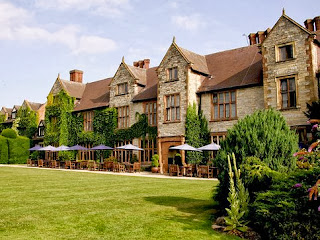 The Billesley Manor Hotel, Stratford Upon Avon is rated 4 roundels out of 5 on tripadvisor.co.uk See: http://www.tripadvisor.co.uk/Hotel_Review-g186399-d210453-Reviews-Billesley_Manor_Hotel-Stratford_upon_Avon_Warwickshire_England.html