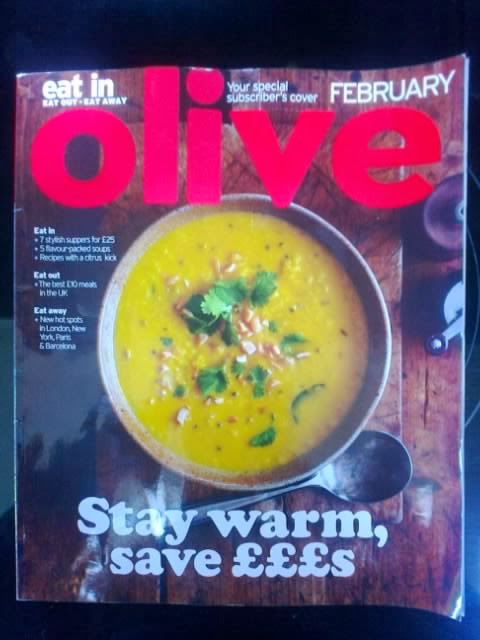 It's just what I expected from the February edition of Olive Magazine - New Year Winter Warmers. Yes, Christmas dishes have disappeared now to be replaced with 'comfort food', such as Black Bean Soup, Lamb Couscous and Banana Muffins. There are recipes to use the seasonal ingredients of purple sprouting broccoli, rhubarb, mussels, pomegranates and kale. I must admit to loving rhubarb, so the Rhubarb and Amaretti pie looks terrific. There are '7 meals for £25', if you are watching the cash in the New Year, and the recipe for Corned beef hash cakes with fried eggs at £1.85 per person looks a real winner.

This edition has lots to recommend it. There is a super article entitled 'Double lives' featuring five food and drink producers who've turned a much-loved hobby into a growing business, without necessarily giving up the day job. They include a teacher-cider producer, an office manager-preserve maker, a waitress-baker and a civil servant-confectioner (below). The article is stimulating in its content and encourages us to sell our home-made produce. 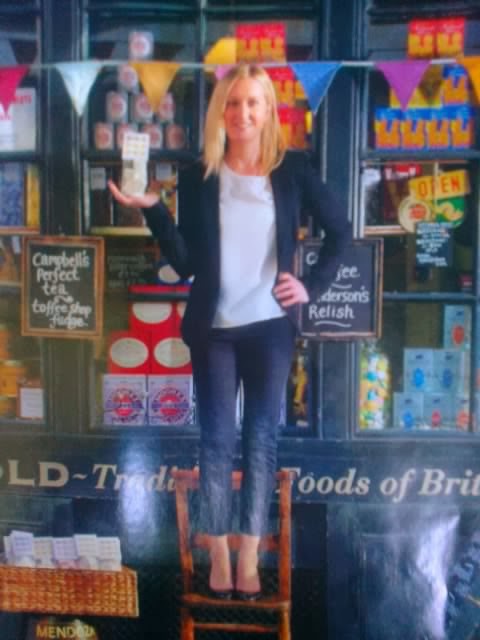 'Eat Away' for February highlights Lebanese food, with authentic dishes from the capital, Beirut, like Stuffed aubergines (see my recipe for Melanzane alla Parmigiana on 20th December 2013). The weekend break to Bordeaux  gives an affordable way to enjoy France's wine capital. Bargain bistros, pioneering chefs and street food in the cities of Paris, Portland, Oregon, New York and Barcelona give readers hints on finding neighbourhoods of note in these culinary capitals. The Poble Sec district in Barcelona is certainly a foodie hotspot if you are ever in this beautiful Spanish city and fancy a pavement tapas. 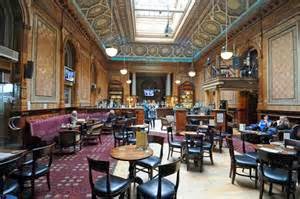 'Bar-Hopping' for the month gives the green light to Newcastle and shares the best places to drink in the Northern city. Best bar sacks are at Popola and best Happy Hour at the swanky cocktail joint frequented by Cheryl Cole, Livello, while if you arriving or departing by train, then make time to swing by Centurion, no ordinary station bar but a grade 1 listed first class passenger lounge opened in 1893 (right). The new kid on the Newcastle block is BrewDog - a craft beer pub. Try some beer battered calamari, Olive says. 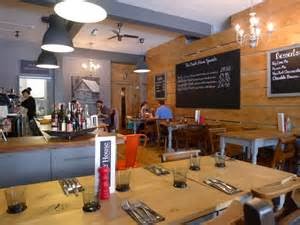 Again this month, restaurants in London feature highly. There are sharing plate menus from East London's 100 Hoxton, Signature dishes from the Merchants Tavern and tastes from the cities best known noodle bar, Koya Bar. The balance is redressed somewhat by 'Eat Out' features on eating houses in Oxford, Leeds, Liverpool, Nottingham and Glasgow. Cardiff 's  Hangfire Smokehouse, an American barbeque place seems a must visit when I am next in the Welsh capital (below). It is good to see some northern restaurants. Sadly, Oliver Peyton's article on eating 'Anywhere but London' sees him take the short trip to East Sussex. Should it be called 'Hardly out of London'?

Finally, I must admit to loving home-made soups, so I enjoyed Olive's 'Souper troupers' with creative ideas for cumin-roasted squash and lentil soup with dumplings (below), and sweet potato, lime and ginger soup. And do not forget this month's cover recipe for yellow dal and peanut soup with chopped peanuts and coriander. (See my recipe for Vegetable Soup on 11th October 2013) 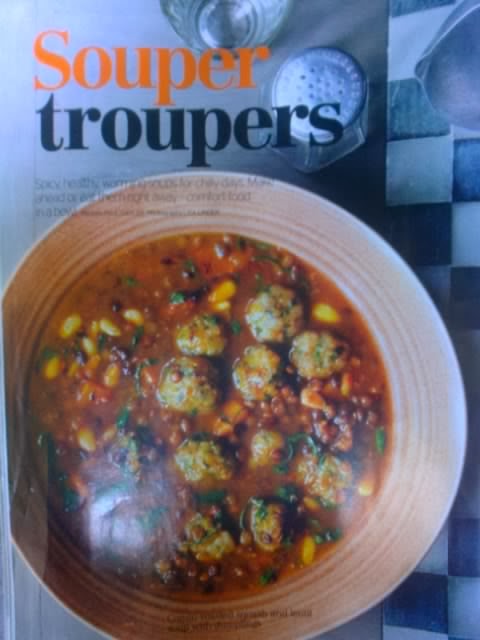