Airport Food - But Not As We Know It! 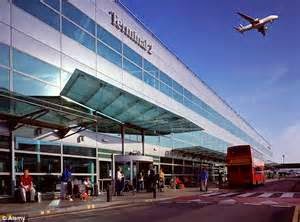 A new reader has suggested that I review airport food the next time I’m waiting for a flight out of the UK. Maybe I will this summer, but in the meantime, I am enthralled to discover that liquid nitrogen chef Heston Blumenthal is cooking up a storm at Heathrow airport’s new Terminal 2. I have eaten at Heston’s Michelin starred restaurant in Bray and experienced his scientifically devised menu, but I do wonder if we really need such gastronomic food in an airport? Yes, says Heston, who has brought his wacky culinary skills to the newly-opened Terminal 2. So, gourmands across Britain had better start planning their next holiday.


Forget a spare £300 or months of waiting for a table at Blumenthal’s The Fat Duck in Berkshire’s famous culinary village - all you need to taste the work of Britain’s top chef, is a flight leaving from the revamped Terminal.  Among the duty free shops and airport bookstores, the Daily Telegraph reports  spirals of white smoke spilling out from Blumenthal’s Perfectionists' Café, where liquid nitrogen-frozen ice cream is topped with popping candy and freeze-dried raspberries.  The first tranche of customers report that a  500-degree centigrade pizza oven (below) stands in the centre of the restaurant, a testament to Blumenthal’s perseverance against health and safety legislation, where each pizza is cooked for just 60 seconds before emerging crisp but still light. 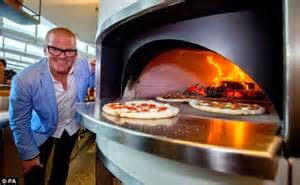 There’s no doubt that foodie culture has now invaded one of the last cornerstones in Britain with only the motorway service station left to be conquered!  Gone are the days when we grabbed a packaged sandwich from Pret or Boots, before rushing through security, or stomached the bland slop that is plane food.  Instead, passengers now  leaving  from Terminal 2 arrive three hours early for their flight, with plenty of time to enjoy a hamburger made from three cuts of beef, with each mince strand lined up to create a perfectly smooth texture. Or, they can order fish and chips and bask in the scent of a small perfume bottle that sprays malt vinegar pickled onion juice. 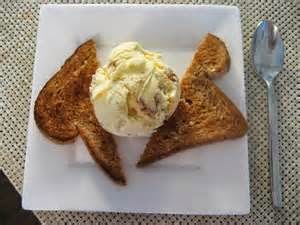 At The Fat Duck at Bray, Heston Blumenthal has fed us eggs and bacon ice cream (above), made foam more popular than ketchup, and played us sounds of the sea during dinner. But this time, surely, he’s gone too far. In between dropping off luggage and shopping for plug adapters, should we really care about food at the airport? Clearly, my new reader thinks so and who am I to argue as an advocate of Real Food? We should all care about food and maybe we certainly need some excitement and inspiration in our airport food. Blumenthal, who has dedicated his life to the scientific crafting of food, believes that eating shouldn’t be a matter of survival. In fact, he says, food is a more complex sensory experience than sex. “Flavour perception is the most complicated thing the human body does. It's more complicated than reproduction. There are more chromosomes in it than there are for reproduction," he explains. It remains to be seen whether membership to the mile high club drops after passengers have sampled Heston’s creations. 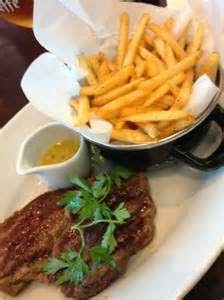 Apparently the menu at The Perfectionists' Café is not be as adventurous as his earlier snail porridge or meat-fruit pâté creations and each dish is the product of extensive research. All the main courses are based on his 2006 television programme In Search of Perfection, in which Blumenthal spoke with scientists, travelled the world and even sent a potato into space in an attempt to create the perfect version of each dish. Several million pounds has already been invested in The Perfectionists' Café, with the custom-made liquid nitrogen pipes alone costing £50,000. The restaurant hopes to serve 1,300 to 2,000 diners a day and so some of the more elaborate processes from the TV show have been pared down. According to a Daily Telegraph reporter, Blumenthal has upped the competition in Britain’s gourmet burger craze. I look forward to tasting The Perfectionist’s Burger when I am next at Heathrow’s Terminal 2. But then again, a pizza topped with truffled culcatello salami, roast portabello mushrooms, fior di latte cheese and truffle oil sounds great.  As for the chips? “The fries are just fries, they’re bought”, says Ashley Palmer-Watts, executive head chef of the Fat Duck Group. “Making triple-cooked chips on site is just not possible. We don’t have the kitchen for it.” Well that’s a disappointment, Heston – not quite perfection at the Perfectionists’ Cafe! 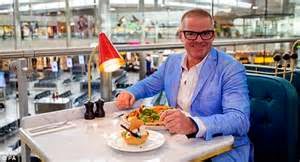