Sublimotion in Ibiza is the world's most expensive restaurant. It’s just £1,200  per person for dinner at Sublimotion,  but for that you get self-mixing cocktails, vivid 360-degree projections, and a pillow of nitrogenised olive oil. Teresa Machan of the Daily Telegraph recently went for a taster at Ibiza’s luxury eating house, and for those overseas readers that did not catch her commentary on her unbelievable dining experience, here it is… 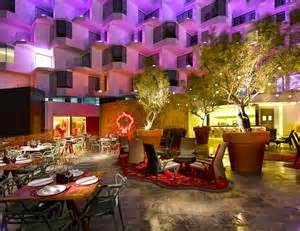 I'd waited a while to see my name in lights and there it was, emblazoned in neon on a 12-seater dining table. Knowing where to sit would in fact prove to be the only certainty in one of the most bizarre dining experiences I've ever had. Most of the buzz surrounding Sublimotion, the new Ibiza restaurant of Paco Roncero, the double Michelin-starred chef (below), is about the price tag. Ibiza is no stranger to excess and experimentation, but the €1,500 per head cost has really raised eyebrows. When pressed, Roncero wouldn't confirm that his brave exercise in theatrical dining is also the world's most expensive. What he did claim, however, is that Sublimotion is the "cheapest life-changing experience anyone can have." "You can't put a price on 27 staff serving 12 diners the best ingredients in a spectacular way," he added. Well, yes, you can and have. From an unmarked door on a street next to the new Hard Rock Hotel we were ushered into what resembled a store room and then, following a brief preamble, into a disco lift that rocked to the sound of the Ramones' Hey Ho, Let's Go! The lift decanted us into a high-ceilinged, windowless oblong room - empty but for a single neon-lit communal table.
The table, which serves as a canvas for light installation, has now become the conduit for a galaxy. A woman's dulcet tones told us we were here to celebrate "magical achievement, of a meeting in time and space". "Place your hands on the circles and join in a halo of energy to close the circle," she instructed as a trail of white light darted around the table, coming to a stop at my neighbour’s seat. Cue Miss Dulcet: "What's wrong? Does somebody not believe?"  Either my neighbour James is a non-believer or I have inadvertently broken the magic circle by holding my iPad instead of placing my hands on the halo of energy. No matter. "Come on, concentrate. Very good, there you are. Here your voyage begins." 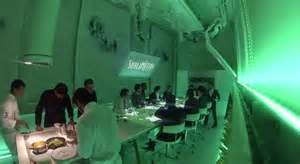 What followed was pure theatre – an immersive dining experience of spinning "plates" (a CD) that appeared to float in mid air, vivid 360-degree projections, a book that opened to a talking head (Paco, asking us to "relax and let ourselves be carried away") and, a personal favourite, a bloody Mary that mixed itself, poltergeist style. “Shake it with your mind,” instructed a waiter, and the container into which we'd poured three liquids from test tubes began to vibrate. Roncero describes himself as a dreamer; I suspect he has been watching too much Game of Thrones. Our 30-minute taster session was a mere amuse bouche for what will be a two and a half hour gastronomical show that might include balloons filled with chocolate cake (but not really) painting your own dessert, dining in an orchard where everything from the floor to the soil is edible, or a nibble in the North Pole.

If nothing else Sublimotion is a marriage of food and technology - temperature, scents, projections and ultimately, trickery of the mind and palate. Every surface, from the walls to the table, can be projected on to, and waiting staff are technicians, musicians and illusionists. 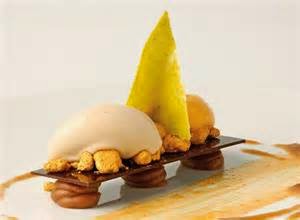 And what about the food?! It is deconstructed within an inch of its life, molecularised, morphed by spherification and - of course - blasted by liquid hydrogen. We taste a pillow of nitrogenised (at -196 degrees C) olive oil, pegged to a miniature washing line and a liquid cheese so rich that, naturally, only a glass of Laurent Perrier can cut through. The white-chocolate foie gras doughnut is surprisngly moreish.

But the highlight for me was the aforementioned bloody Mary we each concocted from three test tubes of liquid. Roncero talks about Spain having the best raw ingredients in the world - the proof for me is in the purest hit of the tomato-infused drink I have ever tasted. Thin and brackish in appearance, the essence of tomato juice explodes in my mouth as if ripened by a thousand Mediterranean suns. As the waitress swooped in to replace it with Champagne I covered it with my hand. An unscripted tweak to the highly choreographed running order, but I intended to savour every sip. 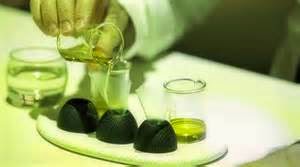 So, is it worth the price? If you have ever enjoyed a simple, rustic yet unforgettable meal anywhere that serves up the freshest, local ingredients with love you'll know the answer. But punters with silly money abound. That night Sublimotion would play host to competitors from the rally of the rich and famous.The entry fee for the event was £40,000 per vehicle. You can bet they weren't fighting over the bill. 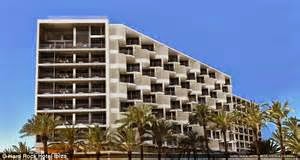