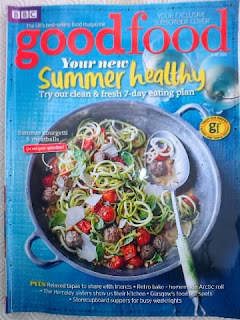 A disappointing edition this month with some uninspiring dishes and lots of poorly taken photographs. Have GF changed their photographer? There is a real art to making food look good in magazine photos and this month's edition has failed miserably. Look at this dish below:- 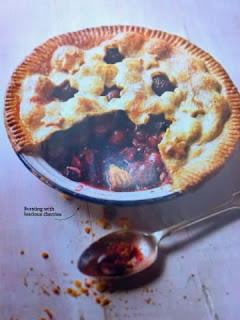 What a mess! It does not inspire me to try this Vanilla and cherry pie and then there is this Spiced whole cauliflower and warm chickpea salad. 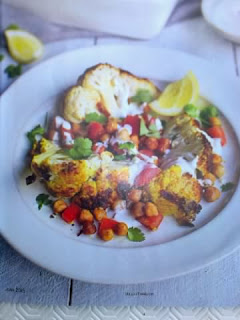 It looks so unappetizing for a so called summer healthy salad, which is Good Food's June headline feature. Editor, Gillian Carter offers readers a 'focus on clean eating designed to give you a pre-summer boost.' Boost?  I found very little to 'boost' me this month! Admittedly the magazine provides a useful Summer Clean Eating Plan for 7 days of summer eating. The best bit for me were the three energy-boosting breakfasts. Unfortunately, the lunches described as 'fabulous', were not fab, while the suppers lacked any excitement. Fancy Lemon polock with sweet potato chips and broccoli mash? As for the 'healthier' Vegetable Lasagne, what does it look like (below)? 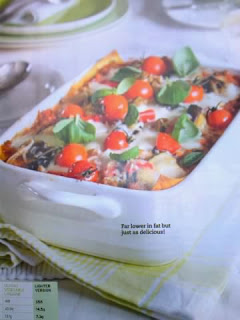 Some loud and plastic buys for eating outdoors look cheap and nasty and brighter than the sun we normally get in June. Likewise 'Gadget Geek' offers readers a locking knife block by Joseph Joseph at only £60. You can have any colour so long as it is black. In contrast, the colour of your spoon can influence how hungry you feel according to psychologist Charles Spence. Good Food directs us to the exhibition at London's Science Museum, 'Cravings: Can Your Food Control You?' It runs until January 2016.

Of the few articles that caught my eye this month, I enjoyed the 'Food Lovers Weekend' in Glasgow (below), with lots of ideas of places to both eat and shop in Scotland's Year of Food and Drink. Shopping in the City's West End looks the place to head for if good cheeses, great coffee and deli-cum-greengrocers are your thing. Likewise, I enjoyed reading about chef Giancarlo Caldesi's fight against high blood sugar levels and his wife's overhaul of his regular diet. 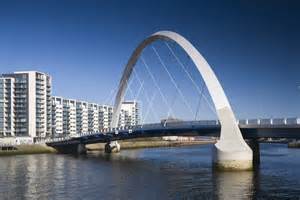 I already eat less meat, but there is an informative article in Good Food on cutting down your meat intake. I didn't know that meat supply per person, per kg, per year in the UK in 2011 was 82.7kg, compared to 121.2kg in Australia and 117.6kg in the US.This is down on 2006 when it was 85.7kg. Not surprisingly the world average is 42.2kg. We are told that UK chefs are starting to change their menus, serving smaller meat portions and giving vegetables equal importance on the menu. However, they still have someway to go to make their vegetarian dishes more exciting!

I was excited by pages, this month, devoted to 'men cooking'and 'men who love food', that was until I read them and then I began to doubt their accuracy. According to a GF survey of couples on their reader panel, 13% of men regularly bake a cake, 40% of men do the grocery shopping and 68% of dads cook with their kids at least once a month. What do you think?

This month's 'Weekend' section offers tapas in the sun, the best veggie burger, shared food and Korean cuisine. Of the tapas, judge for yourself from the photo below? And equally the photos of  'Feelgood food to share' are unexciting and frankly boring. The Korean flavours just about salvaged 'Weekend' this month. 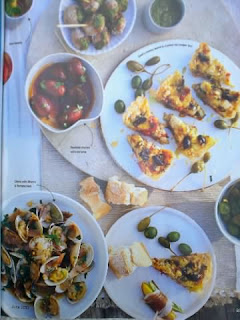 And finally, 'My kitchen' featured The Hemsleys, sisters Jasmine and Melissa who wrote 'The Art of Eating Well'. It's no surprise their kitchen is in South London. Isn't it about time Good Food staff caught a train out of the capital!  As for the kitchen, nothing special, and more a mess than an example of good practice. As for their inspirational dish, they give us 'Nourishing bone broth' - I can't wait! Well, I can - a long time!