As a kid in the 60s, I had a part time job delivering milk - only on Saturdays, but it was extra pocket money and a chance to get out of the house at weekends. Hitching a ride in the electric milk float and hearing the clinking of those glass milk bottles in their metal crates brings back fond memories. No surprise then, that with the move away from plastic bottles, the 'good-old milkman' is making a comeback. 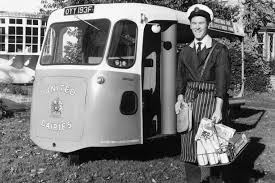 Doorstep deliveries of milk in glass bottles are up by 25% in just two years and now stands at one million pints, according to the Dairy UK (remember the Milk Marketing Board?). As families turn away from plastic and return to the washed and re-used heavy glass milk bottle, the old fashioned milkman is their best option. According to the experts, the glass bottle of milk makes an average of 20 round trips on the doorstep in comparison to the once used plastic variety. That's got to be good for the environment. But not only is there a clammer for milk in glass bottles, it seems that people want to see the bottle on their kitchen shelves too. Is it a fashion statement too?

The milkman's comeback has certainly been fuelled by the public's backlash to the use of plastic and has captured people's imagination, as they want to be seen taking some positive action in the 'ban plastic' campaign. The Cotswold Dairy that supplies milk in Gloucestershire, has noted an upsurge in demand and the operation which started in 1938 has, over the last couple of years, seen more people interested in a doorstep delivery of milk. They picked-up 500 new calls last week, according to press reports. 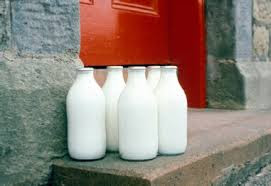 Glass milk bottles are a part of the fabric of British life and to see their return is a joy. Long may it continue. Sadly, the move away from plastic to glass is not cheap, as a bottle of the 'white stuff' from the milkman is 70p, compared with milk in plastic containers at 50p. I think it's worth it though and the more of us that sign up to our local milkman then the cheaper it will become in the long-run!