If you are a lover of a Gin and Tonic then a new crisp with a similar twist is ideal for you. 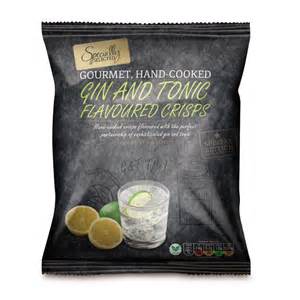 As the festive season approaches we are all likely to drink more than is good for us, whether it's at the office party or the boozy family dinner. But this year provides a new possibility of excess, with the chance to overindulge in gin and tonic crisps. Up and coming supermarket giant Aldi has just launched G&T flavoured crisps as part of its new Christmas range. There is also the chance to get 'sozzled' on their red wine and thyme flavoured packet (below right). An Aldi spokesperson was reported yesterday as saying that they were confident that their customers will like their unique flavour.

However, the UK press has reported that one police officer has taken a different view, branding the crisps as 'totally irresponsible' on social media. PC Claire McNaney (below) who works in an alcohol harm reduction unit for Durham Constabulary, tweeted that 'they give out the wrong message'. Needless to say, dozens of other Twitter users were quick to ridicule her views, replying with such things as 'get a grip woman, people who binge drink aren't doing it on crisps'.

While we are at it PC McNaney, why not ban my wife's steak and ale pies, beer battered fish and wine gums!