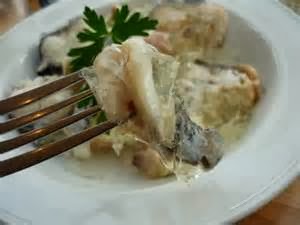 I see that one of the largest supermarket retailers, Tesco, is reporting that jellied eels are booming in popularity across the UK, though I must admit, they aren't my favourite fish. Londoners can get away with more jellied eels by pointing to their heritage - the fish has been popular in the capital since the 18th Century, but what's everyone else's excuse?  Gary Hooper, the chain's fish buyer, suggests that the boom could be due to austerity cuisine. ''The popularity of jellied eels has taken off during the downturn in the economy, because shoppers have been looking for inexpensive, nutritious food'', he said.

The 'delicacy' certainly is an acquired taste, that I haven't yet acquired. The dish is traditionally prepared using the fresh water eel native to Britain. Typically, the eels are chopped into rounds and boiled in water and vinegar, to make a fish stock, with nutmeg and lemon juice before being allowed to cool. The eel is a naturally gelatinous fish so the cooking process releases proteins, like collagen, into the liquid which solidify on cooling to form a jelly, though gelatin may be added in order to aid this process. Recipes for jellied eels are individual to particular London pie and mash shops, and also street sellers; however, traditional recipes for authentic Victorian jellied eels all have common ingredients and cooking methods. What alters is the choice of herbs and spices used to flavour the dish. Jellied eels are often sold with pie and mash- a traditional East End of London food- and eaten with chilli vinegar or with malt vinegar and white pepper. 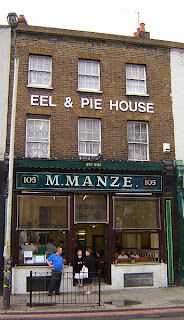 Tesco are celebrating a 35% increase in sales since jellied eels went on its shelves outside of London two years ago and while they were certainly popular during World War II  as rationing took hold, but they are hardly cheap today with Tesco selling 'counter-cooked' jellied eels for £12per kilo, compared to their organic whole chicken at only £7 per kilo. Hardly 'austerity cuisine', or maybe it is the UK capital!

As an alternative to Tesco, you can buy 3 kilos of jellied eels on line for £31.50 from www.frozenfishdirect.co.uk