Christmas food magazines are in the shops now and if you are a regular subscriber, the December editions should already have slipped through your letterbox. We received our 'Olive' magazine a few days ago and I have finally found time to browse through it. 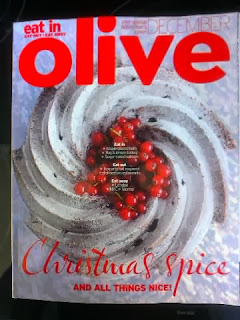 We are told by the media that cooking and particularly home baking, is on the increase as a result of programmes like 'The Great British Bake Off' and 'Masterchef'. Supermarkets report increased sales of cooking ingredients like flour and icing sugar. However, I have my doubts and recent research for British Pudding Week indicates that eight our of ten of us are now too busy to make the effort to prepare a pudding each night. When did you last have a slice of apple pie or bread and butter pudding after your dinner? For me, it was last night, when after  my home cooked chicken curry, I finished off with a portion of homemade apple crumble with fresh cream. I must be an exception, as Pudding Week research shows that while half of us would still be happy to tuck into a favourite pudding every night, we just don't have the energy to get around to making one. Long days at work and stressful commutes, followed by domestic duties and raising children take their toll on our sweet tooth.

Hopefully, the December food mags' will motivate more of us to find time over the Christmas period to take to the kitchen, whether its preparing a festive meal or baking a special Yuletide pudding for 'afters'. Olive magazine, as you would expect in this edition, features a Christmas Day lunchtime spread for eight, that they describe as a ' breeze to put together'! A 'Bay and Lemon turkey with buttery leak stuffing' takes centre stage (below), with sides of 'Domino potato gratin, roast roots with pomegranate molasses, crisp greens with shallot, pancetta and chestnut butter, and Italian sausage and fennel-stuffed red onions'. I love the sound of all the side dishes and it is good to see Olive magazine recommending the best potato - Maris Piper. No other comes close, but so few folk take any care in choosing the right type of potato for Christmas. 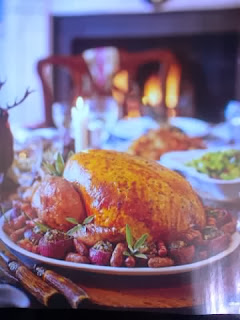 The formula continues with a Boxing Day meal for eight featuring roast salmon - a nice alternative to beef, lamb or pork for 'the day after'.

Olive has  a lot of  recipes and tips to digest for the Christmas period, including '8 festive menus', 'swish crackers', 'the best mince pies' and 'Christmas Spirits', with Port topping the reader's poll. The Cruzan Black Strap Eggnog created by Duck and Waffle's, Richard Woods, is an inspiring cocktail for December and I loved the 'Best Buy Wine' - a 2012 Cotes de Gascogne at only £5.99 from Sainsbury's.

The usual features, 'Eat Out' and 'Eat Away' help make Olive more than just a recipe magazine and 'Bar Hopping' this month focuses on my home town, Birmingham, with barchick picking out  Malbar at Malmaison for the best bar snacks and the Rose Tavern in the Jewellery Quarter as the bar for the best happy hour. One of my favourite tapas restaurants in the UK - Salt House in Liverpool (below), gets a big vote for 'Saying No To Seasonal Set Menus', with a value lunch meal at £10.90 throughout the Christmas period. The owner, Paddy Smith says, ''We don't want to overcharge our regulars just because its December''. If only more restaurants had this view! 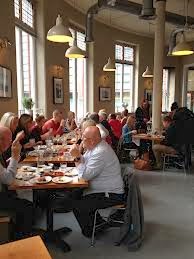 Olive's getaways this month feature, London on a shoestring, New York, with all its different ethnic foods and 15 reasons to visit Vienna. 'Bitesize Weekends', include Dresden, Toulouse, Gothenburg and Turin. Having visited the latter - a beautiful city wrapped by snow-clad mountains, it's a 'must visit place' in winter! 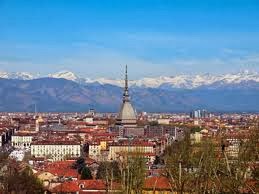 Overall, I found this Christmas edition of Olive a little uninspiring, with most recipes being quite basic and unchallenging to the creative cook. The festive baking section was one of the best parts, but even the coconut cupcakes pictured below seemed quite 'run of the mill'. 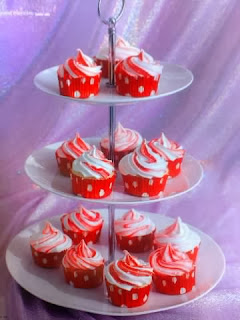 I would suggest that this week's Real Food Inspector's mini fruit pavlovas (below) are a far more inspiring festive bake! 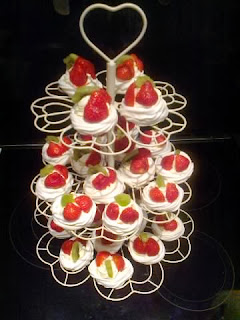