For those who missed it, The Sunday Times started a new four-part series last Sunday, entitled 'The Ultimate Cookbook'. The series supposedly, ''brings together the finest recipes from the chefs and restaurants that have shaped the way we cook now.'' Their introduction suggests that we all have far too many cookbooks that we don't actually use and they claim to have sifted through hundreds to bring readers the dishes that really matter - ''the cream of the crop, the best of the best''. 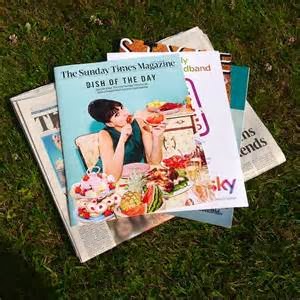 Over the next month the broadsheet's magazine will ''revolutionise your home-cooking repertoire with a little help from some of the most celebrated cooks in the business from Gordon Ramsey and Nigella Lawson to Heston Blumenthal and Raymond Blanc, via Rick Stein and Mary Berry, to name but a few.'' Sunday Times cook, Gizzi Erskine, also claims to have raided the kitchens of a few places we might all be familiar with, such as the River Café, the Ivy, the Wolseley and Nobu. Who are you kidding Gizzi? I doubt there are many readers outside the capital and outside a certain income range would be familiar with any of these top notch and over-priced eating houses!

Sunday's first part kicked off with 'Sunday lunch' and the next three weeks will focus on 'Quick meals' on 24th November, 'Brunch and baking' (a strange combination, I suggest) on 1st December, with 'Dinner party' on the final week of 8th December. But don't get excited, if the first part is any indication of the choice and attractiveness of the offerings, then it might be best to go back to one of those 'too many cookbooks'.

'Sunday lunch' recipes for part one came from 12 chefs, including our Gizzi, and were taken from either their own books or compilations by other authors. Readers were given a list of ingredients for each dish with cooking times and detailed instructions. Recipes ranged from the traditional Sunday roasts of chicken, beef and lamb to the vegetarian and fish options, with two desserts choices and one cocktail.

The biggest shock was to see the inclusion of Heston Blumenthal's 'Triple-cooked chips', which take 3 hours of preparation and 40 minutes cooking time. Hardly a classic and hardly a Sunday lunch dish, despite the newspaper suggesting it was Heston's most influential culinary innovation. Hopefully, his new pizza and burger joint at Heathrow's Terminal 2 will make greater use than me of this ground breaking innovation, when it opens in June. And Heston promises he'll have customers in and out in 11 minutes! 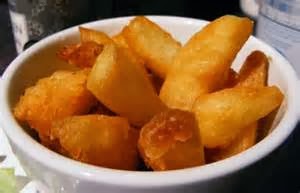 The Jamie Oliver dish 'Sunday roast steak' frankly looked like an accident on a plate, or should I say on a lump of wood. Why is Jamie such a fan of wooden boards for serving food at the table. Can these blocks of timber be adequately cleaned ready for future use? They look so ugly. Judge for yourself below. As for the recipe, I suppose it's a Jamie no-nonsense dish and that's what he is known for, but I wouldn't call it a classic dish. 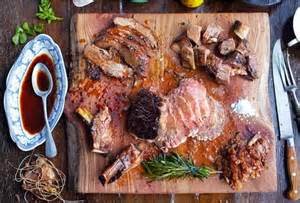 Gordon Ramsey's Roast fillet of beef with tomato and tarragon dressing and Simon Hopkinson's Roast chicken, make up the traditional Sunday lunch dishes and the former is attractive for its 25 minute preparation and cooking duration. However, prime fillet beef is essential and that is not cheap. As for the chicken recipe, there is nothing new in this dish and Simon admits, ''the simple roast chicken is the best''.
The two vegetarian dishes, Mushroom cobbler from Marcus Wareing and Bruno Loubet's Beetroot ravioli are the most interesting recipes from this first week's edition. Wareing's  is rich in cheese, both in the sauce and the topping and cover oyster, flat and brown mushrooms (below). The ravioli is a 3 hour dish, as the pasta dough is hand-made and requires Italian flour, but I suspect '00' flour from Sainsburys will do a similar job. However, are either of these Sunday lunch dishes?
﻿ 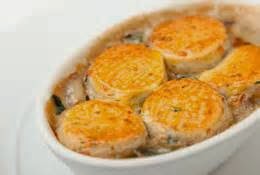 The same can be said for Nigel Slater's Chicken pie (below).  This is a weekday winter supper dish and is uninspiring in its recipe and presentation. Why are we British so keen on pies? They are comfort food, frequently made up in our household from leftover meat and veg, like chicken and leeks, as in Slater's recipe. Not something we would normally serve on the Sunday table. 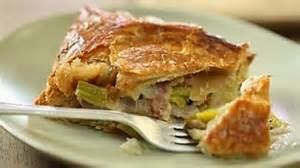 Finally, of the two desserts featured, Raymond Blanc's signature dish, Chocolate fondant, wins hands-down over Marco Pierre White's Lemon tart, although maybe the latter is better suited to the Sunday lunch menu. The fondant recipe only takes 25 minutes from start to finish and looks luxurious (below), while baking the tart is a long slog of 85 minutes. I am surprised this not so simple lemon dessert is a well known Pierre White dish, as for all the time it takes, it looks quite boing and uninspiring for a so called 'classic' (below). 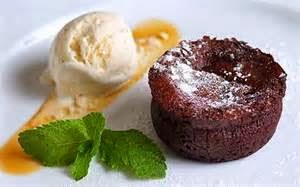 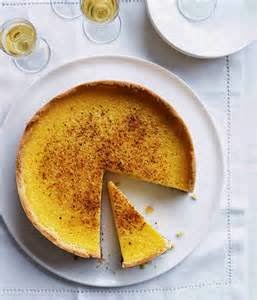 The Sunday Times Ultimate Cookbook part one turned out to be an ultimate let-down﻿ last week and if they are to salvage anything from this high profile Sunday magazine series, then next week's 'Quick Meals' will need to be inspiring as well as quick.
﻿
﻿